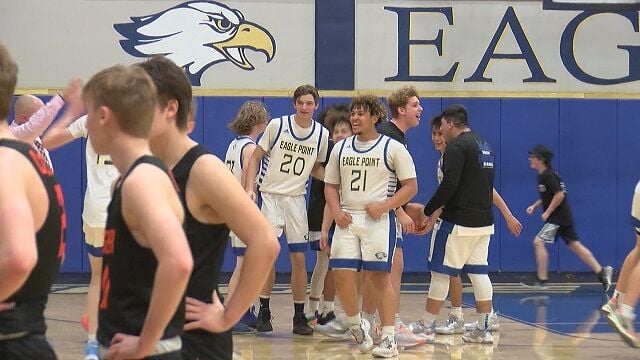 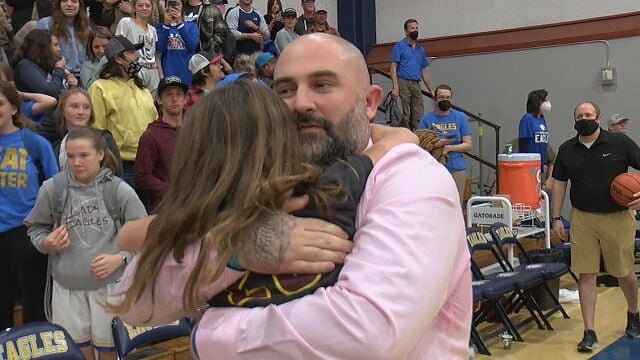 EAGLE POINT, Ore--- Entering Tuesday night, the Crater boys (13-2, 5-1) had beaten Eagle Point (12-1, 5-0) in nine consecutive contests dating back to 2017. In front of what may have been the largest crowd at the Eagle Point gym in the last decade or longer, Eagle Point ended that streak. The Eagles took down Crater, 68-59.

"I think it was just their will and determination," said Eagle Point head coach Ryan Marrs. "We had two great practices these past few days. We knew what our game plan was going to be, last week. The guys showed up ready to practice and work. They gave it everything they had and that carried over into tonight."

The win keeps the Eagles unbeaten in Midwestern play (6-0) and atop the conference.

The environment was something that has rarely been seen at Eagle Point High School over the past decade for Boys Basketball. The overflow seating was opened well before the game and fans filled the seats to the top.

"Well, I know when Crater is on the schedule, there is some genuine interest in the game within the community," said Marrs. "But what these boys have been doing all season, it has really sparked the community. The community has really come out in full support."

The game started out with both teams trading the lead. The game felt like it was destined to come down to the wire.

Eagle Point only took a five-point lead into the half.

That is why it was shocking to see Eagle Point ahead by 15 with 6:24 left in the game.

To that point, the Eagles had been led by senior guard Brennen Neyt. He finished with 26 points on the night and helped a huge 3rd quarter surge for the Eagles.

Then, the Comets showed that good teams don't go away. Along with a sudden surge from the Comets, a reminder that the game was destined to go down to the wire.

Through the remainder of the game and both teams in the bonus, Eagle Point's Alejandro Redondo and Tommy Johnson made key free throws to secure the victory.

"It feels amazing," said Johnson. "I haven't been around the program many years but it feels good to be a part of it and to get them their vengeance."

"This has been kind of our driving force for the first half of the season," said Neyt. "We really wanted to win this game."

For the Comets, Cadan Lasater had a very productive game with 16 points. Colton Vranes and Javon Smith also had double-digit nights with 11 and 10 points respectively.

Eagle Point will be up for another challenge in just a few days. The Eagles will host Churchill (11-4, 6-0), the second-place team in the Midwestern, on Friday at 7:00 p.m.

Crater will not be in action until Saturday. The Comets will host Willamette. That is a game that was rescheduled from earlier in the season. Tip is set for 4:00 p.m. at Crater High School.

Cameron Derby joined the NewsWatch12 team in December of 2018.