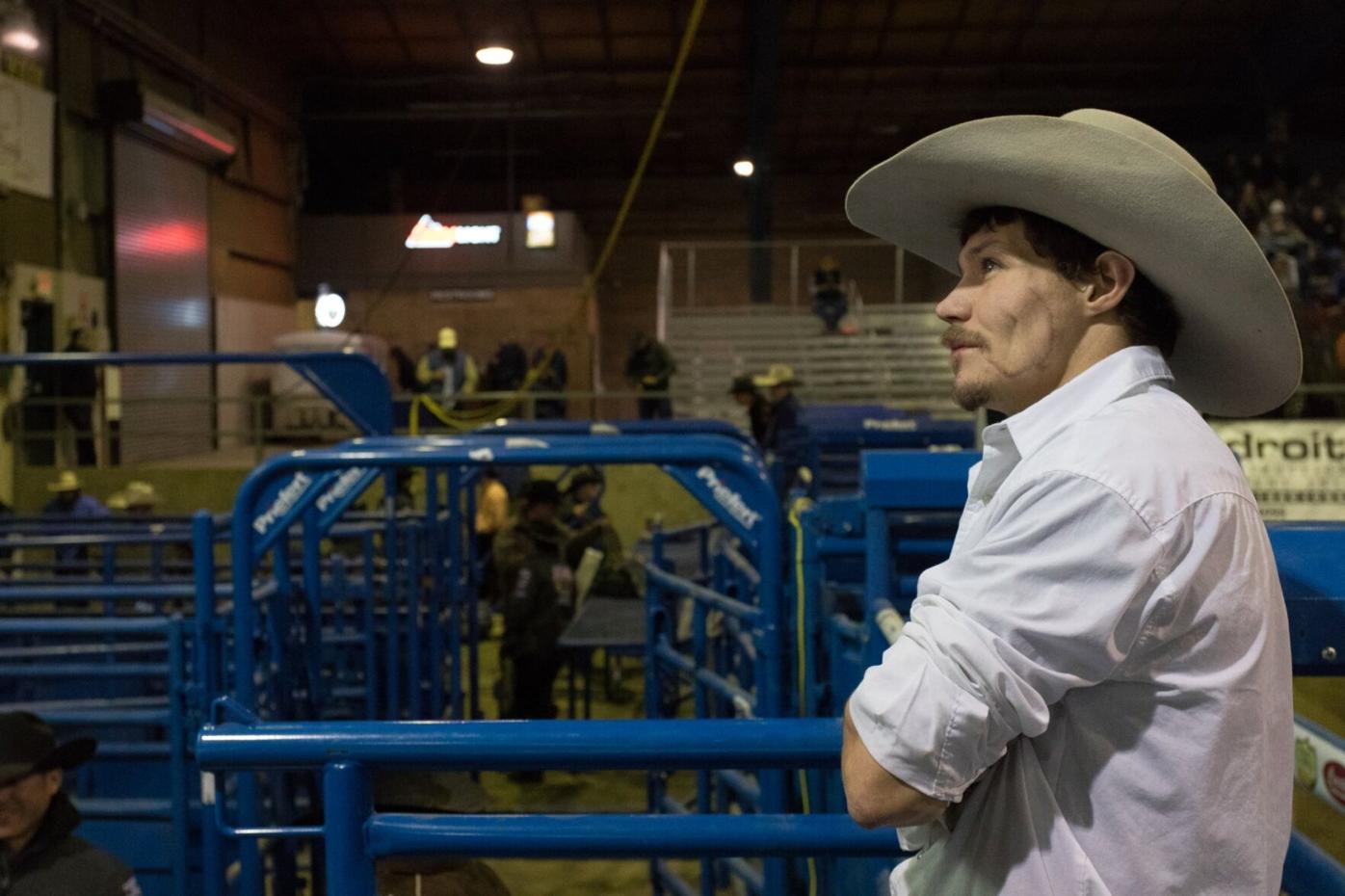 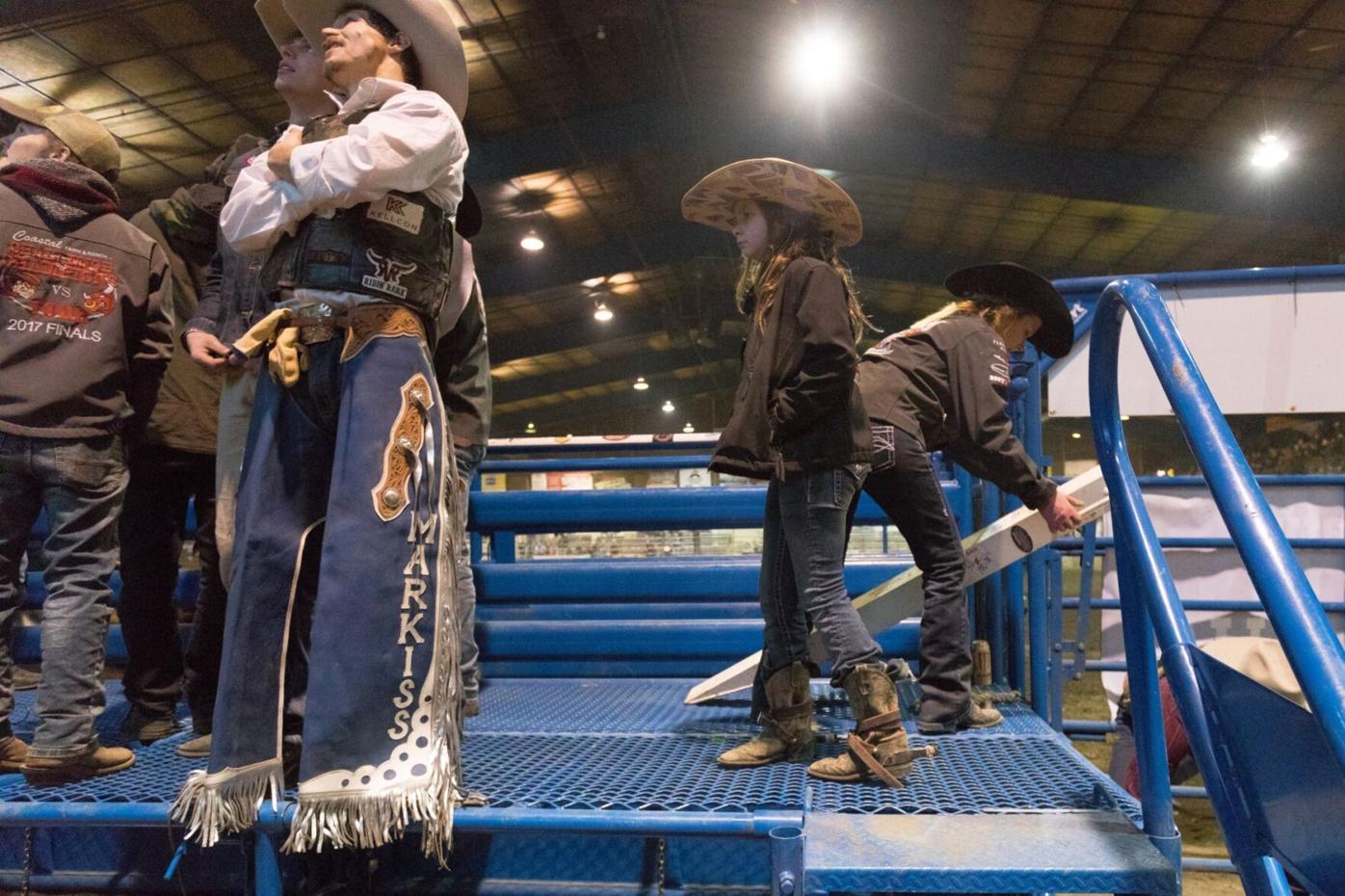 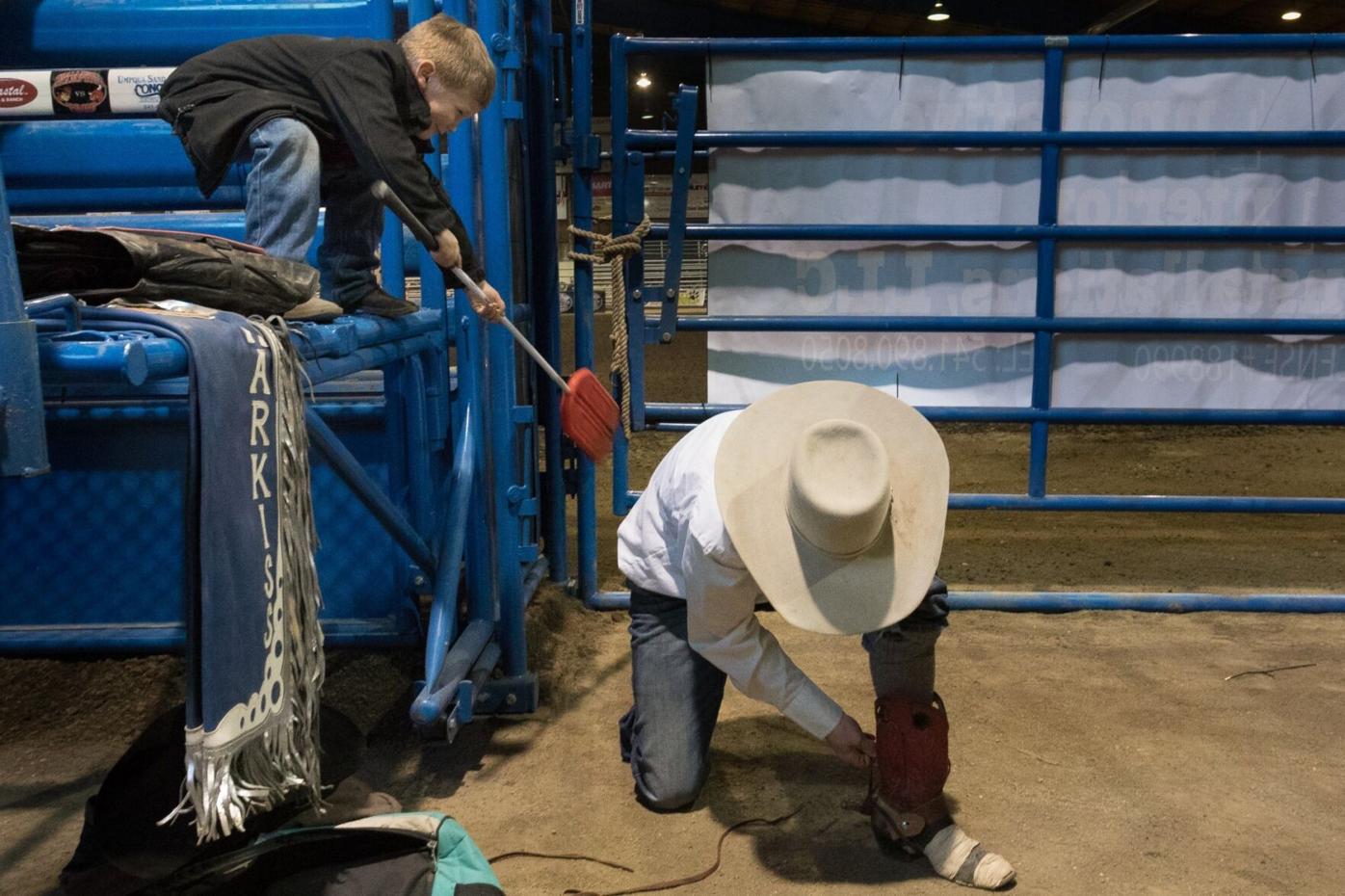 Jory Markiss afjusts his boot while his son swats him with a broom.

Jory Markiss afjusts his boot while his son swats him with a broom.

CENTRAL POINT, Ore. — Jory Markiss, 29, was voted the "Sexiest Cowboy" of the Professional Bull Riders tour in 2014. In fact, Markiss graces the cover for one edition of the Nicholas Sparks novel The Longest Ride thanks to his win in that contest.

That was before a bull stepped twice on his head several years ago, requiring surgery to implant steel plates in his face. He agreed that he is lucky to be alive.

Markiss was in Jackson County this weekend for the Coastal Farm & Ranch Challenge of Champions Tour Finale at the EXPO.

On Friday, after lacing tight his boots, he stood atop the bucking shoot an hour before the contest began, and spoke of his future.

"I'd quit now but I'm too broke. This pays better than working," he said, and guessed that he’d ride for maybe two more seasons before hanging up his spurs.

Markiss was the 18th rider of the night. As soon as the chute opened, the bull — "Fidget Spinner" — bucked and caught Markiss’ free arm, pulling Markiss' face into its horn.

Markiss laid on the bull’s back, unconscious, then hit the ground hard.

“I hit the ground and he stomped on my head and pushed me around a little bit,” Markiss said. His bull ride, the injury, and the effective end of his career flashed by in the space of a few seconds.

Markiss was on the dirt for several minutes. After being helped out of the arena, he was taken away by ambulance to a local hospital.

Markiss said the bull, “broke my orbital socket, broke my nose, shattered the back side of my nose, and my cheekbone as well.”

He asked hospital staff to use some glue and patch him up so he could leave the hospital with his four-year-old son Layton. They told him that blood had pooled behind his eyeball which, if hardened, could make him go blind. He told them to flip a coin to determine if he’d leave or seek further treatment.

He won the toss, but folks talked him out of leaving. Soon he was transported via air medical by Mercy Flights to OHSU in Portland.

Yesterday, Markiss posted a video on Facebook, saying, “Figured I ought to let you guys know, I’m done riding bulls!”

“I’m a father of two kids, and as much as I love riding bulls, everything that comes along with it sure makes it really hard for a guy to guarantee that he can be there through the ins and outs to be able to take care of them,” Markiss said.

A native of San Diego, Mike has been a member of the NewsWatch 12 staff since January 2018. A former member of photo staffs at The Oregonian, Los Angeles Times, and San Diego Union-Tribune, Mike has never worked beyond the left coast.

Butte Creek Mill in Eagle Point grinds back to life

Wrong-way crash on I-5 in Siskiyou County ends with one dead, two seriously injured