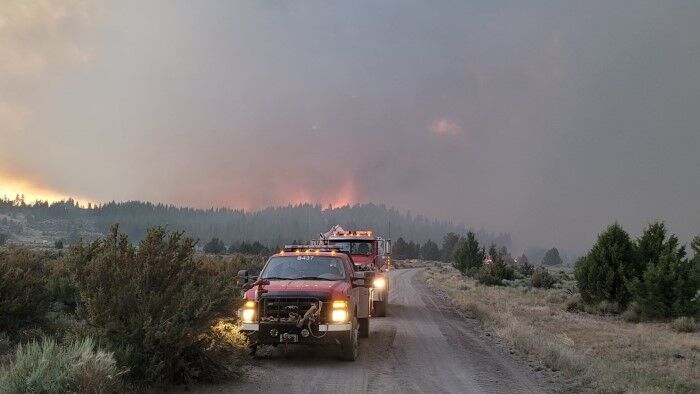 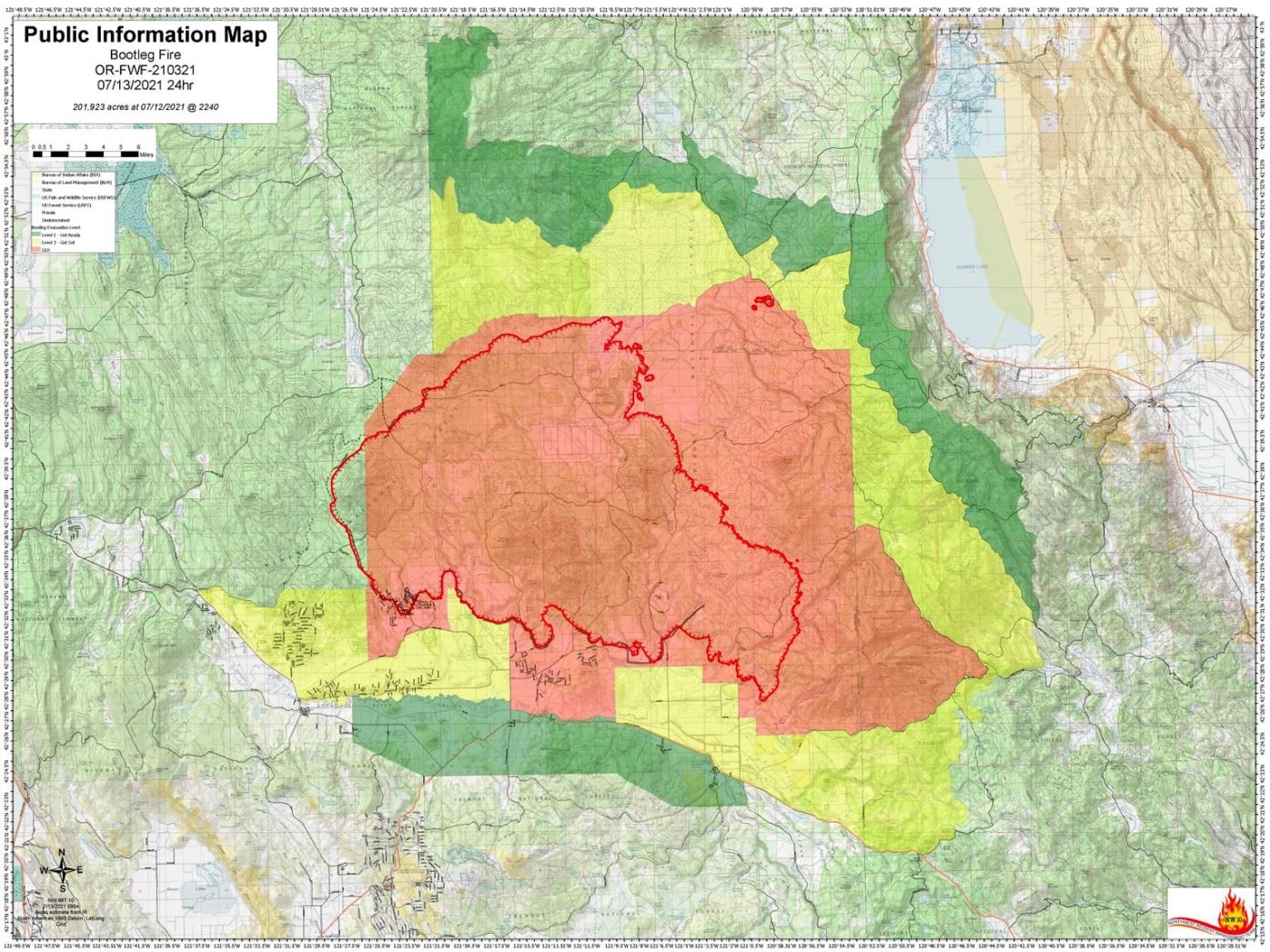 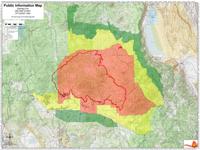 BEATTY, Ore. — After a day of relative reprieve, fire crews on the massive Bootleg Fire were again faced Monday with a highly active fire that ballooned in growth. Fire officials listed the fire's estimated size at 201,923 acres as of Tuesday morning — an expansion of more than 50,000 acres in the space of a day.

According to fire officials, the prevailing hot weather, dry vegetation, and low humidity caused fire behavior to become more active on the fire's northeastern flank, where flames have advanced into Lake County. The latest maps also showed major growth to the southeast, where the fire's footprint stretches across the North Fork Sprague River north of Bly.

Crews were successful in keeping the fire's southern flank from reaching populated areas, but it continued to grow toward the southeast. Officials said that crews built six miles of dozer line toward Obenchain Reservoir, while others worked to connect and improve existing lines.

High-voltage transmission lines that march into California have been de-energized, officials confirmed, and fire officials have been working with the power companies on a plan to safely revive them "as soon as possible."

On the north side of the fire, crews have been battling three new fires totaling 150 acres in the Summer Lake area. Firefighters built dozer lines and set up hose lays in an attempt to keep the fire west of Forest Road 28.

Throughout Monday, structural firefighters from the Office of the State Fire Marshal's task forces worked to find and extinguish spot fires around homes and other buildings. Officials said that firefighters on the northeast side of the fire helped 11 people when winds sent the fire rushing toward them, escorting them to a safe zone in a meadow until the fire passed.

"These firefighters also assisted residents in two vehicles when they became trapped by the fire and were unable to escape because of downed trees. The firefighters removed the trees from the roadway, allowing the group to safely escape," officials said.

The fire's lurch toward Lake County caused law enforcement to issue new evacuations by Tuesday morning, stretching to the north, east, and southeast from Klamath County into Lake. Officials from the U.S. Forest Service also expanded closures in the Fremont-Winema National Forest to ensure that people stay away from threatened recreation areas.

“The Bootleg Fire has moved rapidly through Klamath and Lake counties, with extreme fire behavior driven by hot weather, winds and exceptionally dry fuels since it was discovered last Tuesday,” said Fremont-Winema National Forest Supervisor Barry Imler. “For public and firefighter safety, it is essential that we expand the closure area while firefighters, the Incident Management Team and area fire managers work together to contain and control the fire.”

NewsWatch 12 learned from fire officials on Monday that at least seven homes and 43 other structures have been destroyed by the Bootleg Fire thus far, as crews begin initial damage assessments. More than 100 people spent the night at the Red Cross shelter in the Klamath County Fairgrounds, and one man confirmed that his home was one of those destroyed by the fire.

Incident commanders decided Monday to split the firefight into two zones to the north and south. The Oregon Department of Forestry's Incident Management Team 1 took control of the fire's southern zone. Pacific Northwest Team 10 remains in command of the northern zone, while a team from the Oregon State Fire Marshal's office will continue to focus on protecting homes and structures, with almost 2,000 considered threatened.

The Bootleg Fire's explosion of activity on Saturday afternoon prompted fire crews to fall back from direct attack efforts due to the speed and intensity of the fire. On Sunday, a blanket of smoke over the fire area helped to moderate fire activity, allowing firefighters to get in closer and resume work on building lines.

An interactive map of current evacuation zones can be viewed here.

The Klamath County Sheriff’s Office started to issue citations and says it will make arrests if necessary to keep people out of the Level 3 evacuation areas.