While individual cities vary widely, a new report from the National Council for Home Safety and Security did not rate any Southern Oregon cities highly for safety — with Medford falling near the bottom.

MEDFORD, Ore. — A new report from the the National Council for Home Safety and Security (NCHSS) ranked 33 cities in Oregon for their overall safety, and Medford came in at second-to-last.

"The study was completed primarily to highlight the cities that have had the least amount of violent and non-violent crimes per population, while also bringing awareness to the cities that are more likely to have crime per capita," the organization said in a statement.

Although Oregon is an overall safer state than some in the U.S., Southern Oregon's locales did not rank highly among the safest cities in the state.

"Oregon, for example, has nearly one-third fewer incidents of violent crime per 1,000 people than the average state in the US. However, as the data shows, there are often vast differences from one city (or state) to the next," NCHSS said.

In order, the organization ranked Central Point at #13 in the state, Klamath Falls at #20, Grants Pass at #22, Ashland #25, and Medford at #32 — making Medford, according to the NCHSS study, less safe than Portland at #31. 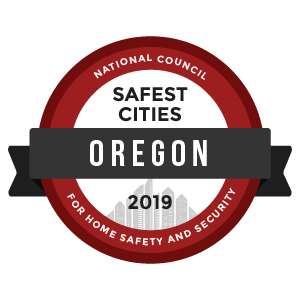 The top five safest cities in the state were, in order: Lake Oswego, Canby, Sherwood, Monmouth and Beaverton.

The least-safe city in the state, according to the study, was Coos Bay at #33.

The organization had the following to say about their methods for conducting the study:

We computed the total number of crimes reported by each city by adding violent crimes and property crimes. We then rated them using the population of the city and created a crime rate as the number of crimes per 1,000 population. Then we transformed the total crime rate variable so that the skewness was reduced and we normalized it so the final number became a score between 0 and 1.

Next, we computed a new variable called Police Adequacy (TotalCrimes / Number of police employees). We consider that the smaller the police adequacy statistic is, the safer the city is. We transformed and normalized this police adequacy variable also, resulting in a score between 0 and 1. Finally, we combined the two scores to create a safety score for each city.

Congressman Peter DeFazio announces he will not seek re-election

Market of Choice donates pallets of food to Access