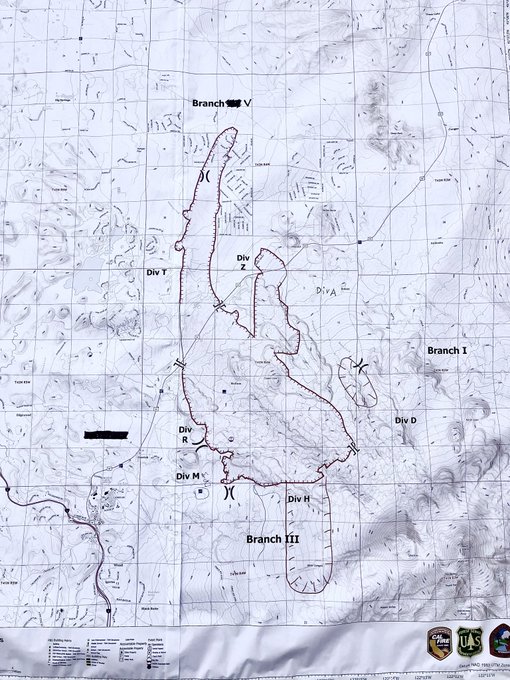 UPDATE: Officials with the Shasta-Trinity National Forest Service say that the Lava Fire is burning 3.5 miles northeast of Weed and has grown to 17,591 acres. The containment on the Lava Fire is at 19%. The fire had growth overnight onto the slope of Mt. Shasta. Highway 97 remains closed between the city of Weed and the city of Dorris. All evacuation orders below remain in place by the Siskiyou County Sherrif's Office.

-All homes on the north side of Hoy Road

-Big Springs Road on both east and west sides

-County Road A-12 north and south

UPDATE: Officials with the Shasta-Trinity National Forest Service say that the Lava Fire near Weed remains listed at 13,330 acres. However, crews plan a mapping flight will be conducted overnight (Tuesday night). The containment on the Lava Fire has dropped to 19%.

The Lava Fire exploded in size throughout Monday, fueled by strong and erratic winds amid record heat. Fire officials confirmed that the fire made a significant run to the north, crossing Highway 97 and frustrating attempts by fire crews to keep the fire hemmed in south of that line.

The fire is now estimated at 13,330 acres as of Monday morning, with containment remaining at 20 percent.

Based on the latest map provided by fire officials, the fire's northward expansion narrowly missed the Lake Shastina community — passing it just to the east — but brought flames to the outskirts of the Mount Shasta Vista subdivision. The Siskiyou County Sheriff's Office said that they did not know "what structures have burned down" or the current status of many areas.

During Monday's activity, the Sheriff's Office issued evacuation orders for a number of areas, starting with residents on the north side of Hoy Road, north along Highway 97 to County Road A-12, and the communities of Lake Shastina and Juniper Valley off Big Springs Road from Highway 97 to McDonald Lane on both east and west sides of Big Springs Road.

Within an hour, the agency issued a second round of mandatory evacuations covering the Mount Shasta Vista Subdivision, County Road A-12 north and south, Harry Cash Road, and 4 Corners to Hart Road.

Highway 97 is now closed from I-5 in Weed all the way to the Oregon border near Dorris, according to Caltrans.

The Lava Fire was originally one of four fires sparked by last week's thunderstorms. Though fire crews managed to quickly find and contain the other three, the Lava Fire continued to grow within the rough, rocky terrain about 3.5 miles northeast of Weed and southeast of Lake Shastina.

Officials remain concerned about the very low humidity levels, extreme heat, and strong breezes in the fire area, which all could provoke further rapid spread.

Is immunity from Covid infection same as vaccine?

'Tis the season for a rise in shoplifting cases