The great conjunction of Jupiter and Saturn on the evening of the winter solstice will be the closest visible alignment of those two planets in nearly 800 years.

MEDFORD, Ore. – On the evening of the winter solstice, the planets of Jupiter and Saturn will appear so close to each other in the night sky that they will look like a “double planet” in the night sky. This great conjunction, as the planetary alignment of Jupiter and Saturn has come to be known, will be special and very rare. This sight hasn’t been seen in nearly 800 years.

The orbits of Jupiter and Saturn align every 20 years. According to NASA, this is because Jupiter orbits the sun every 12 years while Saturn’s orbit takes 30 years. So every couple of decades, Jupiter laps Saturn. When this happens, it creates a “conjunction” in the sky, or a meeting of two objects in the night sky. However, these great conjunctions of Jupiter and Saturn aren’t all created equal.

Aligning with the winter solstice this year on December 21st, 2020, the two planets will be the closest since 1623. However, this will be the closest that’s actually observable for us on Earth since medieval times back in 1226! Jupiter and Saturn will be 0.1 degrees apart, which is less than the diameter of a full moon. Some experts say it may look like an “elongated star” or a “double planet”. Since it’s been centuries since we’ve seen a view like this in the night sky, we’ll have to look and see for sure on December 21st. Now while they’ll appear super close with the naked eye, they’re in reality still hundreds of millions of miles apart.

Provided clear skies, the great conjunction will be shining brightly shorty after sunset. You’ll want to look low in the southwestern sky on that evening of December 21st about one hour after sunset. Unlike stars, which twinkle, both planets will hold consistent brightness and should be easy to find in the sky. Jupiter currently appears brighter than any star in the sky and Saturn will appear just to the east of Jupiter, just slightly dimmer and smaller. Don’t wait too long though that night, the two planets will eventually sink below the horizon. In the days leading up to the big event, you’ll be able to look up and see the two planets getting closer and closer together. 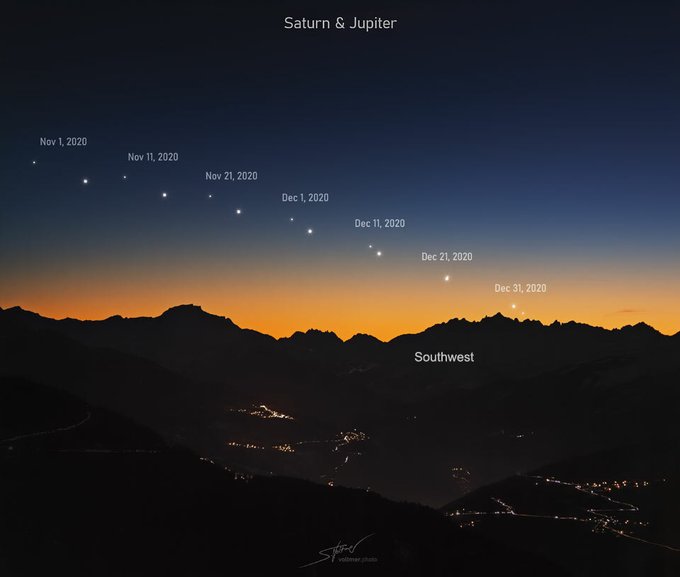 This will be the “greatest” great conjunction for the next 60 years, on March 15th, 2080. After that great conjunction, the pair won’t make such a close approach until sometime after the year 2400.

Will skies be clear our cloudy on the evening of Monday, December 21st, 2020? At this point skies should be mainly clear for most places east of the Cascades and in central and eastern Siskiyou County. It's possible we may see enough breaks in the clouds to see it in the Rogue Valley. Skies will likely be cloudy though in Josephine and Curry Counties. The StormWatch 12 weather team will keep you posted on the forecast for this big event!