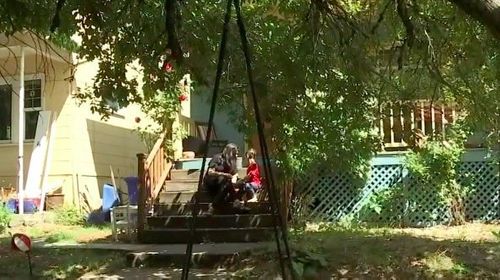 Portland police said the serial number on the gun was checked and it did not come back listed as stolen.

PORTLAND, Oregon (KPTV) -- A Portland mother says her family had the scare of a lifetime when her 5-year-old son found a loaded gun in the bushes near their home.

"I'm very fascinated as to the story of that firearm and how did it wind up in the bushes, and I don't expect that it belonged to a responsible gun owner," said Kira Rodenbush.

Rodenbush can talk about it calmly now but says the gravity of it all is still very frightening. She says last Friday evening her son, Sam, was outside with her husband. While walking down the sidewalk, he got ahead of his dad, then yelled back, "there's a gun in the bushes." The 5-year-old then walked back to his father carrying it.

"'Buddy, you know what, that looks like it might not be a toy. Why don't you set it down and come over here,'" Rodenbush recalled what her husband said to Sam.

Sam put the gun down and the adults snapped a picture, then put it in a plastic bag and called police. Rodenbush says even the responding officer was startled by the find and that the gun was loaded.

"He said, 'I have a 2-year-old son and this is just about one of the scariest things that I could imagine,'" Rodenbush said. "And he said 'yeah, this is a .38 and it's full,' and the safety was off."

Rodenbush says the family stayed calm at the time but they realize just how badly it could have gone in many ways.

She says it gave them an opportunity to run through scenarios they really didn't think they would ever have to.

"It's never too soon to have these conversations with your kids about what to do when they find something dangerous," Rodenbush said.

Rodenbush says she alerted Sam's preschool on Monday, and the teachers then gave him a book about when and how to call 911 and ordered more of them to give to the rest of his class.

Portland police said the serial number on the gun was checked and it did not come back listed as stolen.

Manhunt underway on Highway 126 for suspect in three homicides

Fugitive on motorcycle arrested in Phoenix after high-speed chase

HealthWatch: How to lower your risk from diabetes