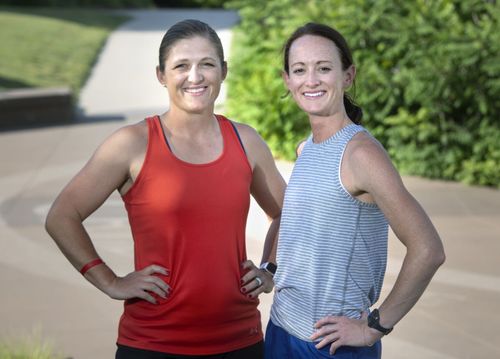 LINCOLN, Nebraska (Lincoln Journal Star) -- Katie King and Kelcey Buck found the trick to motivate them while running: The more miles they log, the more money is donated to organizations important to them.

The two University of Nebraska employees met through a run challenge held by a local running store during the pandemic. Then, two months ago, they created their own challenge, where miles equal funds donated to local nonprofits.

Here’s how it works: King and Buck ask people to pledge a donation to a different cause each month. That can either be a flat-rate donation or an amount based on how many miles the two tally. For those choosing to donate per mile, the women send an email at the end of the month listing their combined total.

Throughout each month, they update followers on their mileage count on their Twitter and Instagram accounts, @mileagefor_.

King and Buck usually run six days a week and average a combined total of 300 to 350 miles a month. Many of their runs are on their own, but they also try to get a few runs in together each week.

In April, they ran for Matt Talbot Kitchen, raising just more than $600. Then in May, for national bike month, they raised about $500 for the Lincoln Bike Kitchen.

To be clear, King and Buck don’t touch any of the money themselves. They simply serve as the vehicle prompting others to pledge and send donations directly to the organization.

The organization each month comes from a list of local causes King and Buck say are close to their heart.

“I think keeping the donations in Nebraska has been one of the points in the background the entire time,” King said. “We want to see the dollars stay local and see where major needs are that we can help.”

This month, King and Buck are running for Mourning Hope, to support its work helping people through the grieving process and the inaugural Mourning Run 5K the organization is hosting virtually.

“I just appreciate what they do and I think it’s important work,” Buck said.

Buck said she had been thinking about the concept for Mileage For for a while, but doubted its success. She said it has been encouraging to see the support the local community has offered so far.

“I think part of why I dragged my feet on it for a long time was that I just thought, ‘No one's really gonna want to support this idea,’” Buck said. “But it has been supported and that's been really reassuring and just cool to see how people want to support the community.”

Apart from raising money for local nonprofits, Buck said she hopes the challenge also helps raise awareness for the organizations.

“Part of the idea of Mileage For, also, is advocating, or at least creating more awareness of, these organizations,” Buck said. “There are just so many opportunities for people to get involved in the community in Lincoln, and I want to help highlight the variety that there are.”

Buck and King signed up to run a marathon in December, which in itself gives them a reason to stay on track with their runs. However, both said Mileage For continues to provide a greater purpose to their running.

“It's nice to go back to the purpose of why we're doing it and helping others,” King said. “It definitely serves as some motivation to show up, especially on those 5 a.m. mornings.”

City of Medford prepares to kick off Winter Lights Festival