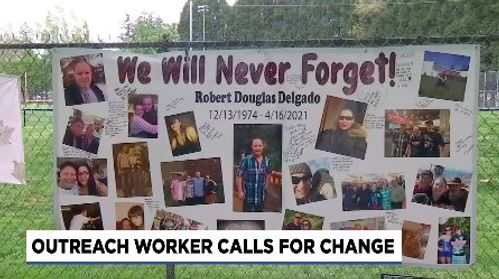 PORTLAND, Oregon (KPTV) -- Candles and flowers remain at Lents Park in the grass and tucked along the fence line, commemorating the place Robert Delgado lost his life almost two weeks ago.

A Portland police officer shot Delgado the morning of April 16, following reports that he had a gun inside the park. Officers say he was not complying, and they found he had a replica handgun on him.

Many of the words written on the posters tied to the chain link are of love, some of the words call for justice.

Raven Drake thinks his death could have been avoided. Drake got to know Delgado quite well over the last several months of his life, working as the Ambassador Program Manager for Street Roots, a nonprofit homeless advocacy group.

Starting in the fall, Drake said she would visit with Delgado, who was houseless, about every other week as part of her outreach work.

"He always had something positive to say-- 'well there's always tomorrow,' or 'it'll be a beautiful day,'" Drake said.

Behind the tough, quiet exterior, Drake said a kind, funny man started to open up to the outreach workers. He had four kids. She distinctly remembers Delgado's jokes.

Drake also remembers Delgado's selflessness. She was passing out water towards the end of the warm season and ran out of bottles. Drake says Delgado offered up one of his own to give to somebody else. He had two.

"He literally followed me through the park and wouldn't let me leave unless I took one, I felt so bad because I was like, that's all the water you have," Drake told FOX 12.

But Drake says Delgado had his bad moments, too, as he grappled with mental health issues. Speaking from experience, Drake says it's rare to not be in an unstable state of mind when you don't have a roof over your head.

She was homeless for almost eight months. Drake says she got off the street last summer, and within a few months began working with Street Roots to form a more robust outreach program.

She says an armed officer showing up to a possible mental health crisis will likely only escalate the situation. Instead, Drake believes these calls are better suited to mental health professionals and street-level outreach teams already doing de-escalation work.

"We need to fund and support them and maybe even ask them to come train PPB officers, moving forward, in healthier ways to de-escalate these situations and move on," Drake said.

The Portland Police Bureau did not respond to FOX 12's request for comment Wednesday.

Delgado's family, along with some local advocacy groups, sent a letter to the state of Oregon to ask for a grand jury investigation into Delgado's death.

Airmen depart from the Portland Air National Guard Base

Coping with a breast cancer diagnosis