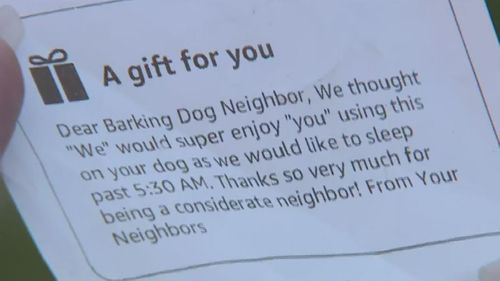 A Sacramento woman called out an anonymous neighbor for sending her an Amazon delivery with a shock collar for her barking dog.

SACRAMENTO, California (KOVR) -- A Sacramento woman called out an anonymous neighbor for sending her an Amazon delivery with a shock collar for her barking dog.

One year into the pandemic, next-door neighbors maybe aren’t quite as neighborly anymore. That’s what’s happened at Leianna Cox’s house.

Whoever sent the package to her didn’t knock on her door to complain, and if they did, they might have found out she doesn’t even have a dog.

It’s a pandemic present with a certain shock value.

She wasn’t sure what she would find inside of the package. But she said it was a shock collar that went for $38 on Amazon.

The gift also came with a gift card.

“It says, ‘Dear Barking Dog Neighbor, we thought We would super enjoy you using this on your dog as we would like to sleep past 5:30 AM. Thanks so much for being a considerate neighbor! From Your Neighbors,’ ” Cox said.

“There’s my cat. This is the only thing I have. They don’t bark,” she said.

Cox does want the anonymous Amazon sender to know this: “Let’s just address that issue. If I did have a dog, and I was to receive this, I would be super upset that you’re telling me to put a shock collar on my dog.”

Cox blames the pandemic as much as the person who sent her the delivery.

“People are at home with nothing else to do, people aren’t going to work anymore, they’re just probably working from home,” she said.

She said Amazon is investigating the delivery on the grounds of harassment.

In the meantime, Cox said she was able to get Amazon credit for the delivery, which she used to buy magnetic eyelashes

CNN investigates what experts call the world's most dangerous commodity

Homicide suspect in custody after altercation in Chiloquin

Family attorney pressed on what Laundrie told parents about Petito