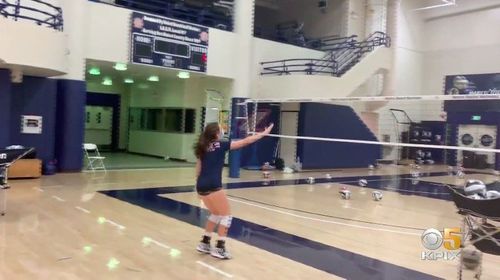 The family of a Redwood City high school girl volleyball player is suing San Mateo County and the state of California demanding changes in COVID-19 restrictions to let the girls play.

Fourteen-year-old Stella Buch plays at Encore Volleyball in Redwood City. Due to the pandemic, they have been allowed to practice but not compete in games against other teams. Now Stella and her mother, Heather, are asking a judge to change that.

Stella is a freshman at Menlo School in Atherton and says she started playing volleyball in 4th grade.

“Volleyball has just been a really key part of my life. I think it’s shaped me as a person,” she explained. “I was looking forward to playing high school volleyball for a really long time so I’d be just so happy if I could get a season.”

She and her mother saw that the state lifted some restrictions on outdoor sports last Friday and they wondered why indoor high school sports were still banned when indoor college and professional sports are not.

“There’s no answer. There’s no explanation that we’ve gotten about why the Warriors can play, why college can play at those levels but not at the high school level,” said Stella’s mother, Heather Buch.

That’s why Stella and her mother filed this lawsuit in San Mateo County (PDF) Friday afternoon asking the courts to decide that issue. In the lawsuit their attorney wrote, “If a sport is safe for college students or professionals to play when following certain protocols, it is no less safe were high school student athletes to follow those same protocols.”

Heather says, “We don’t want to break the rules. We want to fix the rules so that we can all get back to sports safely and following the protocols.”

She says they’re asking for a temporary restraining order, meaning they want the ban lifted immediately while the issue works its way through the court system.

KPIX reached out to the governor’s office Friday afternoon asking for comment on the lawsuit but have received no response.

HealthWatch: The health benefits of giving