More than a week with no power, Oregonians demand answers from PGE 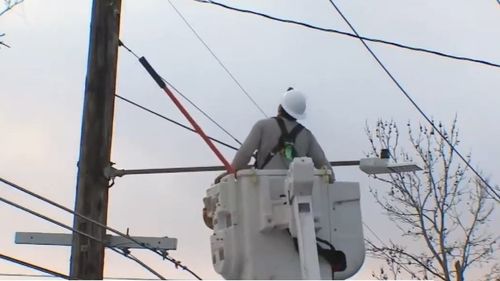 There are still about 38,000 customers without power because of that historic winter storm. PGE's Elizabeth Lattanner said it's the worst winter storm they've seen in 40 years.

PORTLAND, Oregon (KPTV) -- Thousands of Oregonians are still in the dark, and many have been without power for more than a week. Those affected are demanding answers from Portland General Electric.

There are still about 38,000 customers without power because of that historic winter storm. PGE's Elizabeth Lattanner said it's the worst winter storm they've seen in 40 years.

Customers are asking why it's been taking so long to restore power.

"A record number of crews out there addressing each and every piece of that damaged equipment and damaged wires and poles and things that need to be repaired before we can fully restore that power," Lattanner explained.

She said there is no hard estimate as to when all power will be restored and that crews are working 24/7 to get every customer's power turned back on.

Some people are asking why they haven't seen crews in their neighborhood.

"It could be that the impact to your particular area is further down the line. So it could be not visible to you that we're doing the work necessary to restore your power," Lattanner said.

Others are asking why their neighbor's power is back on, but theirs is not.

"What's likely the case is they are on a different feeder or line that brings power to their house than their neighbors," Lattanner said.

She also said folks shouldn't worry about paying for services they didn't use.

"If they're experiencing an outage, we're not charging you for power," she said.

Lattanner said PGE is always preparing for storms, but the magnitude of this particular one is what's making things so challenging.

"We're always preparing for storms. This storm, in particular, was incredibly challenging because of the amount of ice we saw building up on power lines," she said. "In some places from pole to pole, you can imagine a thousand pounds worth of ice weighing down on those wires and trees, so everything was more severe than we've seen in decades."

PGE has more than 400 crews still working with help from other places across the state of Oregon and from neighboring states, including Washington, Montana and Nevada.

Governor Brown extends COVID-19 state of emergency into May

Crossing the bar like a pro with Ocean Coach

Teaching kids to be safe around guns

In the Kitchen: Pear & Brie Galette

In the Kitchen: White Bean Chili