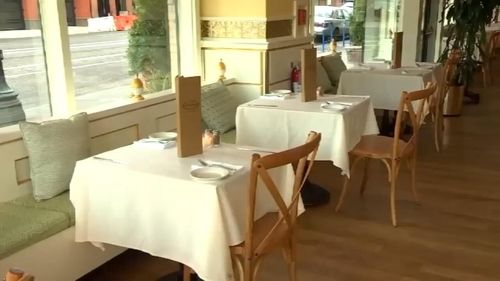 Jason Brandt, the CEO of ORLA says the group is calling on the state to ease restrictions adding the science isn’t there to keep restaurants restricted to take out and delivery only.

PORTLAND, Oregon (KPTV) -- The Oregon Restaurant and Lodging Association is calling on the state to lift some restrictions on restaurants and allow them to have indoor dining.

The organization says the restaurants and lodging industries continue to suffer greatly. It points to Oregon Employment Department data that shows leisure and hospitality businesses lost 25,000 jobs in December.

ORLA says changes to restrictions for other industries is welcome news but still thousands of restaurant operators are not assisted by the modifications.

Treva Gambs, owns Gamberetti’s Italian Restaurants in Salem and Albany. She says the last year has been tough.

“I have never seen anything like this, you know, it is devastating,” Gambs said.

She has been in the restaurant industry for 40 years. In an attempt to keep people safe, she and other business owners made changes in order to stay open.

“A lot of them spent money putting in the plexi partitions, did some great renovations and we are punishing them now for doing the right thing,” Gambs said.

She adds there are several challenges and costs associated with the state’s current reopening metric plan that categorizes counties by risk level. She points to food costs, having to discard unused food, employees not having reliable schedules and finding other jobs. Gambs says employees have left to go other places to make money. That adds training costs on her end for new employees. She adds she would like to have a timeline to be better prepared and plan.

“There is nobody not running a business not knowing a timeline, having a plan, having an execution, so this we’ll wait and tell you in two weeks, how do you really try to be successful,” Gambs said.

Jason Brandt, the CEO of ORLA says the group is calling on the state to ease restrictions adding the science isn’t there to keep restaurants restricted to take out and delivery only.

“The vast majority of the states in our country have indoor dining open right now and they are finding ways to really manage the virus in a multifaceted way,” Brandt said.

He says the Oregon food service industry accounts for less than 1% of all workplace outbreaks in the state and 4.7% of Oregon’s overall outbreaks, but operations remain shut down.

“We are disproportionally saddled with economic restrictions that make it virtually impossible for our small businesses to stay in business,” Brandt said.

One thing ORLA would like to see change, a small step, is to allow some sort of indoor dining even if it is at 25% capacity.

“The reason I am so confident in that is because we did have indoor dining across the entire state earlier in 2020 and case counts did remain low during that time,” Brandt said.

For Gambs, she says she is trying to stay hopeful for the future adding if she didn’t have hope she would have already thrown in the towel.

“Those are tough decisions for her to make, I understand I would not want to make life and choice for anybody but I am because we are closing and my staff are, you know how long has it been no rent for them,” Gambs said.

FOX 12 did reach out to the Governor’s Office and OHA for comment and has not heard back.

Hi: 47° Lo: 29°
Feels Like: 43°
More Weather
Fog and stagnant air in the valleys, dry and mild weather continues into Monday

Fauci: Omicron variant almost invariably will spread all over

Peru's president pledges support for those affected by 7.5-magnitude earthquake

How do juvenile criminal cases differ from those involving adults?

Pet of the Week: Chaos & Greg

Food safety during a power outage