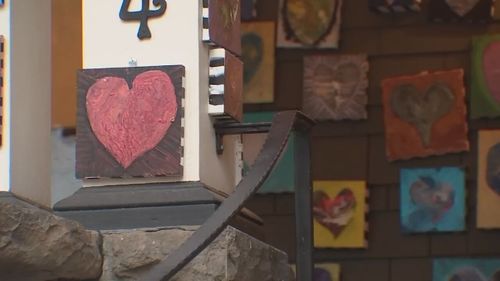 A local artist started a memorial gallery in her home for COVID-19 victims in Oregon.

PORTLAND, Oregon (KPTV) -- A local artist started a memorial gallery in her home for COVID-19 victims in Oregon. It started small in the Spring and grew much larger with the pandemic’s toll.

The gallery features hearts to represent each life lost statewide — and with more than 1,400 deaths statewide this year creating this memorial has been quite the endeavor.

With designs as individual as those they represent, Jan Trullinger Dwyer’s uses acrylic paint, even a blow torch to make the hearts.

“That’s really people there’s a certain amount that you can influence and then there’s just who they are,” said Jan Trullinger Dwyer.

Jim Dwyer, Jan’s husband, says he never could have imagined that by 2020’s end he and his wife’s home would be covered in hundreds of canvas hearts.

Jan decided back in March, she should make one for each Oregonian who passed away from COVID-19.

“I was just home and locked down and trying to figure out what to do with myself and deal with my own sadness and anxiety about it,” said Jan Trullinger Dwyer.

It was a small project at first, that eventually became overwhelming as daily death tolls grew, and is now a public display of the pandemic’s toll, called the “Front Porch Gallery.

“There have been days that I had to kind of pump myself up ya know 54 in one day that i had to take a breath,” said Jan Trullinger Dwyer.

In fact, starting in December, Jan had to switch from painting a canvas per person to a canvas per day, but the symbol remains the same.

Now going into the new year, she hopes for better days ahead but she and Jim both know her work here is not done.

“Those that passed those that lost so much if they can’t stop, she can’t up high in her place of refuge you will find her painting that which unites us all our hearts,” said Jim Dwyer, reciting a poem he made for his wife.

Jan says anyone who wants to help paint hearts or to display some of these hearts can reach out to her on her Facebook page. Click facebook.com/StumptownStudioArts

Veterans have a new outlook on life thanks to ColumbiaCare

SOREDI extends date for businesses to apply for SOCARES funds