'Our goal is for this to resolve peacefully': PPB Chief Lovell responds to contentious blockade set up by N. Portland home 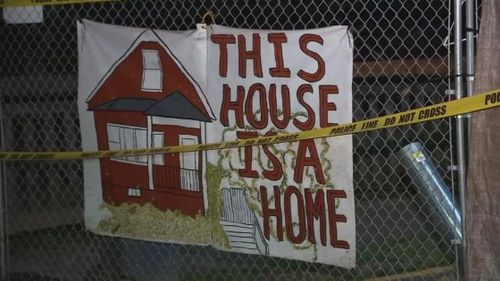 A blockade over an eviction remains set up in north Portland, and now both the family involved and Police Chief Chuck Lovell are hoping to find a peaceful resolution.

PORTLAND, OR (KPTV) -- A blockade over an eviction remains set up in north Portland, and now both the family involved and Police Chief Chuck Lovell are hoping to find a peaceful resolution.

On Tuesday, demonstrators said they were trying to prevent an eviction of a family of color by setting up makeshift blockades along North Mississippi Avenue, where a home known as the "Red House" is located. The area blocked by fencing, signs and other materials stretches from North Skidmore to North Blandena.

Since Tuesday morning, police and Multnomah County deputies have tried to move the group, but so far, they have refused to leave.

Chief Lovell says he's wants a "peaceful and safe resolution" to the demonstration.

"We are greatly concerned about the fortification of barricades, stockpiling of weapons, armed sentries, attacks on journalists and threats to kill officers in graffiti in this public space," Lovell said in a tweet Wednesday morning.

He went on to say, "Our goal is for this to resolve peacefully to increase safety for all involved. I encourage those involved to reach out to our demonstration liaisons so we can discuss a peaceful outcome."

The "Red House," located in the 4400 block of N. Mississippi Avenue, is at the center of the blockade and ongoing situation. A court order was issued in February of this year to evict people from the home, prior to state and federal emergency moratoriums in response to COVID-19 financial hardship.

The court order was served by deputies on Sept. 9, giving people in the home time to leave the property and seek housing assistance, according to law enforcement.

FOX 12 spoke with the family living there and they say the encampment began in support of them after they were evicted. The Kinney family says they've been fighting against the foreclosure for more than two years and have filed lawsuit about it.

After police and deputies removed people from the property and arrested several people on Tuesday, a protest began to gather in the streets at the scene.

Police said people in the group threw rocks and paint-filled balloons at officers, damaged police vehicles and blocked the roadway.

Mayor Ted Wheeler later Tuesday authorized police "to use all lawful means to end the illegal occupation on North Mississippi Avenue and to hold those violating our community's laws accountable."

"There will be no autonomous zone in Portland," Wheeler said, with his full statement on Twitter.

The Kinney family told FOX 12 they want a peaceful resolution too, but right now it's a bit of a waiting game to see what happens next with the "Red House."