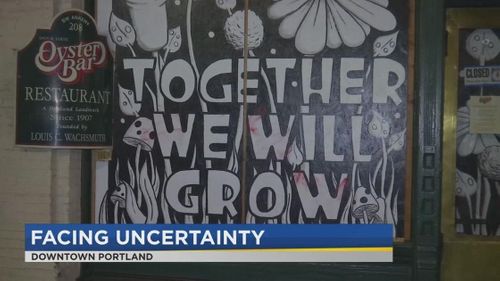 The owners of both Huber’s Cafe and Dan and Louis Oyster Bar say they need the economy to turn around and to get back to indoor dining.

PORTLAND, OR (KPTV) -- Two Portland institutions that survived the last pandemic, world wars, the Great Depression, and more than 100 years of business, now find themselves struggling.

The owners of both Huber’s Cafe and Dan and Louis Oyster Bar say they need the economy to turn around and to get back to indoor dining.

"I don’t think they’ve ever shut down the world like this, I mean we’re in this huge metropolis and there’s nobody here, there’s nobody downtown," the owners of Dan and Louis Oyster Bar, Keoni and Michelle Wachsmuth, said.

They decided takeout and outdoor dining wouldn’t cut it this time, that it’s better to stay closed until they can serve people indoors.

"There was no profits that came in this year, so basically we’re going into the cold winter with just borrowed money in our pocket," Michelle said. "We still have bills, we still have rent we have to pay."

And as time goes on, they say it's not sustainable.

"What if this next year is like this year, that’s what scares me a lot," Michelle said. "If the economy doesn’t come back this next summer, we’re not gonna make it."

Another Downtown Portland staple is struggling, too. Huber’s Cafe is cooking up takeout; they've amped up delivery and added online ordering, but it pales in comparison to their in-person sales, 40 percent of which are alcohol thanks in large part to their famous Spanish Coffee.

He said they're dipping into reserves, and when their lease is up in July, they may have to go month to month.

"We can’t go on forever dipping into those reserves because eventually, it will dry up," he said.

Both restaurants working hard to keep not only their businesses but pieces of Portland history, alive, in the most difficult of circumstances.

"We love this place and we want to, ya know. save it," Keoni said.

One Million people now fully vaccinated against coronavirus in Oregon