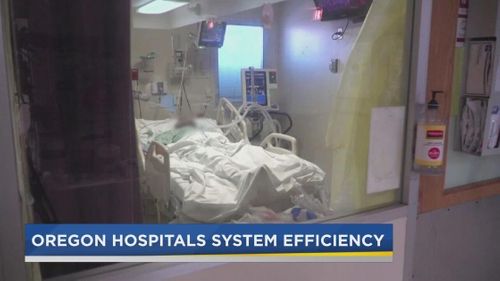 The study shows there are 1.6 hospital beds per 1,000 people. It’s a startling figure when COVID-19 cases are surging in Oregon.

PORTLAND, OR (KPTV) -- Oregon has fewer hospital beds per capita than any other state in the U.S., according to a 2018 study by the Kaiser Family Foundation. More recent data wasn't available.

The study shows there are 1.6 hospital beds per 1,000 people. It’s a startling figure when COVID-19 cases are surging in Oregon.

Becky Hultberg, the Oregon Association of Hospitals and Health Systems, says what having a low number of hospital beds per capita really means is Oregon is efficiently using its hospital systems.

“It is interesting to note that Oregon does have a small number of hospital beds per capita compared to most other states. That’s a good thing until you’re in a pandemic,” Hultberg said.

Oregon, she says, efficiently uses its hospital systems by not building excess capacity.

“What we don’t want to do is overbuild and have a lot of expensive, acute care beds that just sit empty. Someone’s paying for those beds and, typically, that’s going to be your commercial insurance plans, Medicare, or Medicaid,” Hultberg said.

In the spring, one of the biggest issues facing hospitals was the lack of personal protective equipment.

Hospitals also made plans to expand beds into non-clinical areas like the state fairgrounds in Salem in March.

The most serious concern right now, Hultberg says, isn’t so much beds because the state does have surge plans in place. Additionally, hospitals are managing the capacity they do have much more carefully.

The issue now is staffing.

“Our staff are exhausted, some of them have gotten sick in the community and are not available for work, and so staff has become much more of a challenge,” Hultberg said.

From the Portland metro area to the north coast, 82% of the ICU beds are full right now. 293 beds are taken by patients.