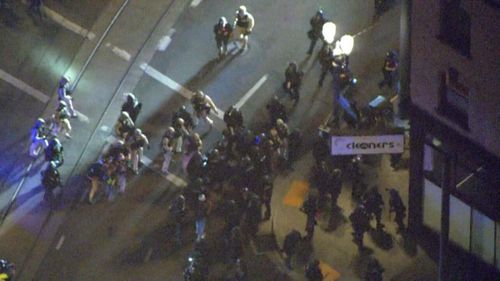 Law enforcement said the riot included the seizure of weapons, including a rifle, as well as hammers and fireworks, and the arrest of a suspect accused of throwing a firework at police.

PORTLAND, OR (KPTV) -- A riot was declared and the National Guard was activated due to “widespread violence” following marches by demonstrators into downtown Portland Wednesday night.

"Two groups gathered in downtown Portland last night. One group demonstrated peacefully for hours by the waterfront. Their clarion call advocating for racial justice and Black lives has resonated with Oregonians and driven real reform over the past several months.

"Unfortunately, a second group of self-styled anarchist protesters, some armed, also marched downtown last night, with no discernible goal other than to cause violence and vandalism.

"They shattered the windows of a church that feeds Oregonians in need, a women-owned and operated business that raises money for immigrant and women’s rights, and many other storefronts.

"Indiscriminate destruction solves nothing. These are acts of privilege.

"At the request of the Joint Incident Command protecting free speech and keeping the peace in Portland, I activated the Oregon National Guard last night. These are Oregonians like you and me, who have volunteered their time and taken leave from their jobs and their families to keep the streets of Portland safe.

"For weeks, Oregonians have called for an end to the violence. I will continue to do everything in my power to keep the peace in Portland and make sure that people can make their voices heard safely."

Law enforcement said the riot included the seizure of weapons, including a rifle, as well as hammers and fireworks, and the arrest of a suspect accused of throwing a firework at police. The thrown firework was initially reported as a Molotov Cocktail.

By 10 p.m., law enforcement said the riot declaration had been rescinded and officers had "disengaged in an effort to de-escalate the situation." All remaining demonstrators were asked to remain peaceful by deputies.

By 10:30 p.m., however, a remaining group downtown was declared an unlawful assembly again by law enforcement.

The post-election rallies started with two different groups, one at the North Park Blocks and another at Revolution Hall in southeast Portland, before both marching into downtown Portland. The group that gathered on the east side blocked traffic as they crossed the Morrison Bridge.

By 7 p.m. rioters were seen vandalizing buildings, including breaking the windows of a St. Andrea Bassett Church which helps those who are homeless, experiencing poverty, mental health issues and substance abuse. They also broke ATMs. An American flag was also set on fire in the middle of a downtown street

The Multnomah County Sheriff’s Office first declared an unlawful assembly downtown around 6:50 p.m. due to people damaging property. A few minutes later, the situation was declared a riot.

The National Guard was activated within minutes of the riot declaration as part of the unified command “in the interest of public safety.”

The Multnomah County Sheriff’s Office first declared an unlawful assembly downtown around 6:50 p.m. due to people damaging property. A few minutes later, the situation was declared a riot.

The National Guard was activated within minutes of the riot declaration as part of the unified command “in the interest of public safety.”

The Unified Command said there was confirmed reports of vandalism which included broken windows and graffiti. Authorities have seized hammers, spray paint and commercial-grade fireworks. The Unified Command also denied rumors of the use of an unmarked van being used to grab and arrest people. They said those arrested are being taken in marked police vehicles. Although some agencies were using unmarked vehicles to transport law enforcement.

Shortly after 9 p.m. the riot declaration was rescinded, according to a statement from law enforcement, as "the violence and criminal activity has stopped."

By 10:30 p.m., deputies said remaining rioters were "subject to use of force to include crowd control munitions and CS gas."

At about 11:15 p.m., OSP troopers stopped a vehicle without license plates that was interfering with traffic, the Unified Command said. The troopers discovered the driver, identified as Wesley C. Fant, had a handgun and arrested him on a charge of unlawful possession of a firearm.

The remaining group downtown mostly dispersed by 1:30 a.m., according to the Unified Command.

At least 10 people were arrested in downtown Portland, according to the Unified Command, and the following items were recovered from arrested suspects: multiple firearms, ammunition, a knife, commercial and consumer grade fireworks, body armor and gas masks.

The Unified Command said no injuries were reported in the events Wednesday night and no tear gas was used.

In the Kitchen: Blue Crab Ravioli with Cognac cream sauce