Billboard set on fire during gathering outside Portland Police Association building, no arrests made 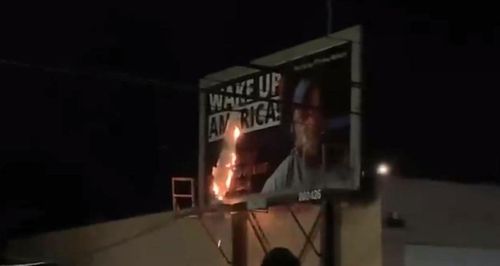 Police said that at 11:15 a.m., someone from the group started a fire on a billboard next to the PPA building.

PORTLAND, OR (KPTV) -- No arrests were made after a group gathered outside the Portland Police Association building Monday night, according to police.

At around 8 p.m., the group began to gather at Arbor Lodge Park in north Portland. According to police, some people in the group had shields and masks with them.

Police said the group had support vehicles following the march.

When the group arrived to the PPA building, they were given verbal warnings from the sound truck to remain on the sidewalk and to not vandalize buildings.

According to police, the group immediately began spray painting the building. Traffic was blocked along North Lombard as the group used A-frame traffic signs to block the roadway.

Police said that at 11:15 a.m., someone from the group started a fire on a billboard next to the PPA building. The fire did not affect the building and appeared to extinguish on its own, according to police.

Portland Fire & Rescue was called in to check the billboard and building it was attached to.

The group was given another verbal warning from the sound truck to stay off buildings, to not light fires, and to remain on the sidewalk.

Police said with the exception of the sound truck, officers did not interact with the crowd.