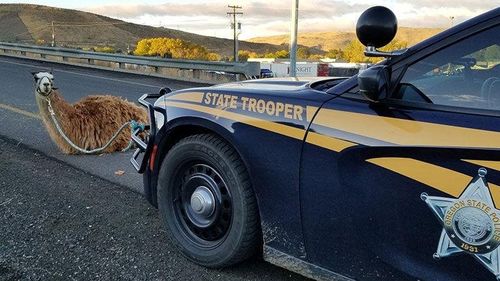 A mama llama brought the drama on Interstate 84 in eastern Oregon.

BAKER CITY, OR (KPTV) -- A mama llama brought the drama on Interstate 84 in eastern Oregon.

An Oregon State Police trooper snapped a photo of the stubborn llama after it had stopped, sat and stared on down the highway near Baker City last Sunday.

The trooper’s report described the animal as a “displeased mama llama” that fell from a pickup hauling three llamas from Washington to Utah.

The pickup had a homemade livestock rack that didn’t hold one of the llamas around an uphill corner, according to OSP.

The trooper said, fortunately, the truck was traveling at low speeds and traffic was minimal. However, once the driver realized he’d lost a llama, he stopped his truck, and then the other two llamas bailed out.

So, now there was one llama squatting on the highway, and two more running free down I-84.

The sitting llama refused to yield, so the trooper offered to “llama sit” while the driver wrangled the other two animals.

“In the end, mama llama was reloaded into the truck and provided some medication to ease her mama llama trauma and also reunited with the rest of her travel companions,” according to the OSP report.

The driver was given a warning for a potential traffic violation, operating with a leaking or shifting load.

As for the photo that Oregon State Police shared across social media of the llama and her “displeased facial expression,” the trooper said: “I snapped a photo of her because in my tenure I’ve yet to be successful in catching the elusive I-84 llama.”

Vaccine Watch: Medford School District says more than 97% of staff are in compliance with vaccine mandate

All Natural Pest Elimination increases its contribution to Coats For Kids this year to $5,000

Knowing the risks of breast cancer.