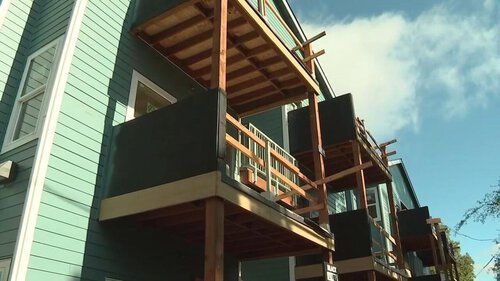 A huge milestone for the Portland Housing Bureau and Habitat for Humanity was revealed Wednesday: a dozen nearly complete homes in north Portland meant to address housing solutions.

PORTLAND, OR (KPTV) -- A huge milestone for the Portland Housing Bureau and Habitat for Humanity was revealed Wednesday: a dozen nearly complete homes in north Portland meant to address housing solutions.

The homes, located off North Lombard Street and North Olin Avenue, will all be be sold to current and former residents of Portland’s African American neighborhoods.

"Despite all that and the longstanding disadvantages, we have navigated the system, and achieved a piece of the dream,” said Dana Shephard with the Portland Housing Bureau about the project.

The homes were made possible by a city policy that works to address decades of housing policies that pushed people out.

The homes are just a few weeks away from being move-in ready.

FOX 12 spoke with a buyer, who said she can’t wait to get to call one home.

“Because of you, I thought it was impossible, but you've shown it is possible,” Deloris Griggs said at the Habitat for Humanity event. “This is what it trickles down to. People like me, who never thought I would be in this position and here I am."

Wednesday was a celebration for Griggs, one of the first homeowners, under Portland's North/Northeast Preference Policy.

According to the City of Portland, the policy works to correct the harmful impacts of urban renewal, including the historic and ongoing displacement of longtime community members.

"Just from 1990 to 2010, more than 10,000 Africa Americans have been involuntarily displaced from north and northeast Portland. Families that have historic ties. But today we take a step in the right direction,” Steve Messinetti, CEO of Habitat for Humanity, said.

The city’s policy gives preference to housing applicants with generational ties to the area, like Griggs, whose mother lives nearby.

Griggs toured her future home, anticipating all the cooking she'll get to do this Thanksgiving in her new kitchen and the legacy she'll get to pass down to her granddaughter and great-grandson.

She wanted to thank Habitat for Humanity, the Portland Housing Bureau and their nonprofit partners for their work, in making her future home possible.

“Though I'm standing here today alone, I didn't get here alone. I had a village,” Griggs said.

Thirty more homes under the North/Northeast Preference Policy are being built in the Kenton neighborhood.

Curry County woman among the 14 new deaths in Oregon today