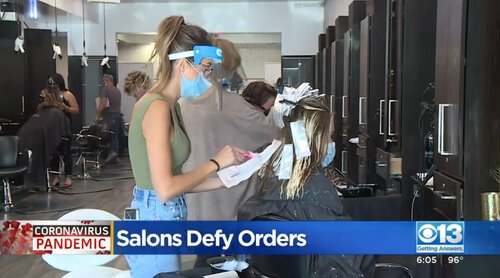 Stockton, CA (KOVR) -- Thousands of hairstylists across the state are heading back to work today, despite the state’s order prohibiting all indoor operations.

With temperatures over 100 degrees, no one wants to get their hair done outside, hairstylists say. They say they have no other choice but to work indoors.

“Come after us,” said stylist Chelsey Kieffer. “Can they tell me that I can’t feed my daughter?”

Chelsey Kieffer is one of dozens of stylists at Pomp Salon in Stockton, breaking out the blow dryer and defying the state’s health order.

Kieffer says she has no other choice, even though she was recently diagnosed with lupus. She’s putting her health at risk, she says, to put food on the table for her family.

“We will do what we have to do,” Kieffer said.

“This is literally an act of desperation,” he said.

He’s opening his salon doors with extra protocols in place. Even your feet get a bath before you hit the salon chair.

He said, “My stylists needed to get back to work they’ve been out of work five months of this year, and they’re failing and struggling financially.”

Ballin helped start the movement Open Safe California. He says he has to pay $175,000 in back-rent after being closed for five months. Now, hundreds of salons are a part of this movement, defying the state health order, and opening operations inside.

“We’re all worried; this is not fun for anybody,” Ballin said.

He could be subject to fines, or steeper penalties like misdemeanor charges, for not being in compliance.

“The State Board of Barbering and Cosmetology has sent out threatening letters that thy may revoke licenses, they may impose fees and everyone here is risking that today so they can feed their kids,” said Ballin.

But you won’t see the county demanding the salon to close its doors, at least according to San Joaquin County Supervisor Tom Patti, who showed up to Pomp.

“I support all jobs as being essential, and I’m here to get a haircut,” he said.

California is the only state in the country not allowing salons to operate indoors, and the supervisor doesn’t know why.

“One state, this state says, “no,” and I have to question the methodology,” he said.

But when it comes to enforcement, Supervisor Patti says the county and the state have bigger problems to address in his county.

“Enforcing somebody getting a haircut is probably low on the scale on what’s important for public safety,” said Patti.

The State Board Of Barbering and Cosmetology says it will pursue action against their license for salons and barbershops who put public health and safety at risk. As of Monday afternoon, there haven’t been any reports of enforcement on that level

In the Kitchen: Gnocchi alla Vodka