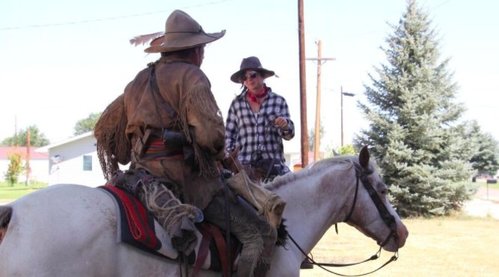 Nebraska (Star-Herald) -- With only two riding horses along for company, two modern-day adventurers are on their way west from Independence, Missouri, along the original Oregon Trail to the coast.

Oliver McCloskey, an amateur historian from Cedar City, Utah, and his partner, Kelsey Wright from southern Indiana, left Missouri on June 23 and plan to arrive in Oregon City in early November.

The actual Oregon Trail was about 1,900 miles, but when McCloskey and Wright arrive in Oregon, they will have covered some 2,200 to 2,300 miles.

“I’ve been toying around the idea of doing this for a while,” McCloskey said during an interview Friday in Lyman. “When I decided to do it, the whole plan came together in about 12 days.”

As of Friday, the pair have been on the trail just over six weeks, covering anywhere from 18 to 25 miles a day. Then about every seven to nine days, they take off a day or two to rest the horses.

During their overnight stop in Lyman, McCloskey figured they had covered 615 historical miles along the trail. Because the Oregon Trail can no longer be ridden in its entirety and is broken up by private property, the couple has covered about 720 miles.

McCloskey has ridden a number of historic trails in the West, such as the Jedidiah Smith Trail and the Dominguez Escalante Trail, but this is the biggest trip he’s tackled.

“We only have two riding horses along for the trip,” he said. “They’re not pack horses and we don’t have a support staff. It’s just us because I want to make the trip as authentic as possible. We’re sleeping under the saddle blankets at night.”

Along the way, they’re stopping at all the major historic sites and markers. Their last stop was on Thursday at Horse Creek Crossing. On their way out from Gering, they went through Mitchell Pass.

“It’s a lot of fun learning more about the Oregon Trail era,” Wright said. “I’ve been a horse rider all my life, so this is a good trip. We’ll be in Oregon in November so I’m looking forward to the changing seasons.”

McCloskey said that overall, the weather has been nice during their trip, although they’ve hit two major storms that packed 80 mph winds and dumped some heavy rain.

Local hospitality also made an impression on them. During overnight stops, the couple has been offered breakfast, dinner, and food and water for the horses. Several local churches have offered to house them for the night.

McCloskey said they’ve already talked about their next adventure. During the current Oregon Trail trip, they rode along the Santa Fe Trail from Independence to Garden City, Kansas. They want to pick up the Santa Fe Trail in Kansas and ride west to the Santa Fe/Taos area of New Mexico.

A self-taught historian, McCloskey has published a number of ledgers and journals from the fur trade era. To keep his work authentic, he only consults original materials and not narratives from other historians.

An interesting note: McCloskey has made his own saddles and also a set of buckskins he wears on the journey west. That includes a deerskin bag for his 1820s era smooth-bore long rifle.

“My interest in the Oregon Trail isn’t so much with the immigrants, but with the earlier fur trappers who blazed the trail in the early 1800s,” he said. “They’re the ones who opened the West for immigration in 1842.”

The horses McCloskey and Wright ride don’t have names. During many of their stops, some of the town’s children will come out to visit and give them names.

Of all places they’ve stopped during their westward adventure, one area stands out for them.

“I think Nebraska is the nicest place I’ve ever rode through,” McCloskey said. “We haven’t met a bad person yet and everyone is so friendly. They’ll go out of their way to help you.”

After overnighting in Lyman, McCloskey and Wright saddled their horses Friday morning, picked up some water and headed toward the Wyoming border.

Vaccine Watch: Medford School District says more than 97% of staff are in compliance with vaccine mandate

All Natural Pest Elimination increases its contribution to Coats For Kids this year to $5,000

Knowing the risks of breast cancer.