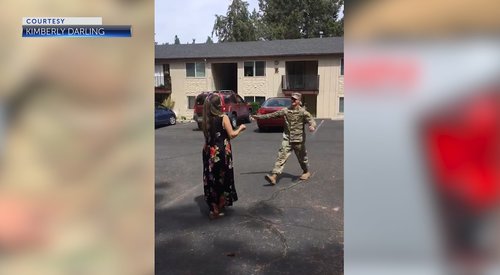 BEND, OR ( KTVZ ) -- An Oregon Army National Guard soldier from Bend said that after watching so many videos on social media of soldiers coming home to happily surprise their families, he wanted to do the same thing -- and he did, surprising his mom for a happy homecoming over the weekend.

Specialist Wesley Darling enlisted in the Guard in March 2017 and was deployed last September. That was the last time his mother, Kimberly Darling, saw him in person.

“It was a goodbye, and in the days we're living in, I didn't know if I'd see him again or not," she recalled Monday.

Darling said he flew to Eugene from Texas on July 4 to visit his girlfriend, Leeondra Nealon, and their 1 1/2-year-old daughter, Leeona. He then drove down to Bend to surprise his family on Sunday.

With the help of his younger brother, Travis, who was visiting Bend from Corvallis, he was able to pull off the surprise homecoming.

“The last week before we flew back, I texted both my parents on WhatsApp, 'Hey, just FYI, I probably won’t have WiFi for about a week, we’ll be doing training exercises,' that sort of thing," Wesley Darling said.

Travis said his mom was aware he was visiting from Corvallis, but had no idea Wesley was also going to be in town.

He said his mom wanted to take pictures outdoors when his brother texted him, letting him know he was nearby.

"I already know he’s coming, so I'm keeping watch, and I look behind -- and there’s a guy in Army uniform walking," Travis said. "So I start laughing, and my mom thinks I'm laughing at her. That's when I started recording."

In a video captured by Travis, Kimberly screamed at the sight of Wesley running toward her and embracing her.

"I had sent him some care packages, and texted him and FaceTimed," Kimberly said. "Seeing that he looked good was the most relieving part of FaceTime. It was like, 'Okay, I'm seeing him and he's okay.'"

She described her feeling of seeing Wesley in person on Sunday as being in a state of shock.

"I was like, 'I can't believe I'm seeing you!' Because I didn't know it would happen again," Kimberly said. "I was pleasantly surprised -- and so glad to be wrong."

Kimberly Darling was also in the Army and worked as a public affairs officer for the Navy. She said she had witnessed so many military homecomings, but never thought she would experience one herself.

"Ironically, whenever I watched those homecoming videos, I always cried and thought, 'That will never happen to me,'" Kimberly said.

Darling attended Sky View Middle School and Mountain View High School. He graduated from the University of Oregon with a bachelor’s degree in psychology.

Darling is a specialist E-4 with the 2-162 Infantry Battalion, based in Springfield. He will return to Eugene on Tuesday.

"I definitely felt the support from family and friends while I was gone," Darling said. "It was definitely a challenging year. We worked hard. And it’s great to be home.”

Body found in Wyoming believed to be Gabrielle Petito

Asante hospitalizations down to their lowest point since early August

The Origins of Covid-19: Searching for the source

For restaurants, the economic recovery is 'moving in reverse'