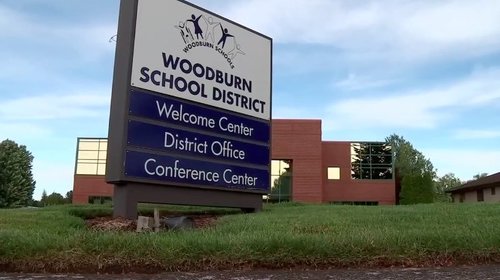 A Woodburn police officer was put on leave after someone alerted the police department about a negative social media post allegedly made by the officer.

Woodburn, OR (KPTV) -- A Woodburn police officer was put on leave after someone alerted the police department about a negative social media post allegedly made by the officer.

Law enforcement has not said anything about the post's content nor the officer's identity.

The officer was assigned to the School Resource Officer Unit, which has been suspended pending a review of the program and an opportunity to seek input from the community and school district partners, according to law enforcement officials.

Due to the urgency of the allegations, Woodburn Police Chief Jim Ferraris launched a personal investigation on Tuesday.

“The information I read and saw is troubling and disturbing and we are committed to a full and transparent investigation,” Ferraris said. “The content of the complaint does not reflect the values of the Woodburn Police Department, nor do we condone any violence as suggested from the information in the complaint.”

Ferraris said the investigation would be completed as quickly as possible.

Though police won't confirm any information about the post, a petition is now circulating, asking Woodburn police to de-fund Woodburn's SROs.

"It actually ends up being something that deters people of color, children of color, from fully participating in school," Kara Romero, a former social worker, said.

It's something Romero says she believes and has been making sure city officials know her position.

"We don’t need police officers in our hallways, we need them available for whenever something really terrible happens," Romero said. "And all the other circumstances can be handled by other professional."

"I don’t think it’s a good idea just because there are things that happen in the school that teachers are not prepared to handle, you know, discipline issues," Brown said.

Brown says he was a teacher for around 30 years in Idaho and worries about the response to school shootings without resource officers.

"If you have one on site, then your chances of saving lives is a lot higher," Brown said.

But Romero says in a city like Woodburn, police are so close to the schools that that isn't a valid point.

"If we need then, they can be here," Romero said.

FOX 12 also spoke with Hector, a seventh grader at French Prairie Middle School. He says he goes to school with a resource officer and likes it.

"He’s actually pretty nice to us and talks to us about cyber-bullying and how everything is the way it should be and talks about school campus and what goes on school campus," Hector said.

Romero said she worries about the negative impact SROs have on students of color, and what is known as the school to prison pipeline. She says other professionals could make a bigger impact.

"If we have more social workers, more counselors, instead of more police officers, we’re addressing the social and emotional needs of students long before the problems come up," Romero said.

FOX 12 reached out to Woodburn police for more information, but the department said it would not comment further.