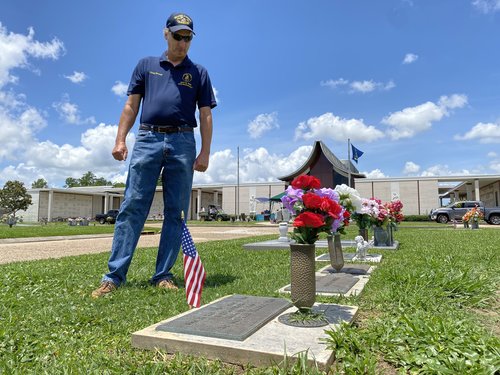 CHALMETTE, LA (WGNO ) -- This Memorial Day looks different at the National Cemeteries because they aren’t doing the traditional flag placements due to Covid-19 pandemic. WGNO’s Kenny Lopez found a veteran who found a cemetery that allowed him to place flags at their cemetery this Memorial Day weekend.

While most cemeteries are not having flag placements this year because of coronavirus, St. Bernard Memorial Gardens in Chalmette gave Thomas permission.

“I couldn’t believe how many veterans were buried here at St. Bernard Memorial Gardens. There are a total of 929 veterans. 554 World War II vets, 2 killed in Vietnam, 2 POW’s in Germany from World War II, and one Pearl Harbor survivor. I placed flags at all the headstones here in the garden, so more than 600 of them, we only weren’t able to get the smaller flags for the mausoleum graves this year,” he said.

“St. Bernard Memorial Gardens is the only cemetery that allowed me to place the flags here this Memorial Day because they are open. I talked to management and they were all in,” he said.

Doug said that he is inspired to place these flags because of one veteran in particular— Captain Stephen Leslie with the U.S. Marine Corps. He was killed in Operation Praying Mantis in 1988 in retaliation against Iran for the mining of the USS Samuel B. Roberts. Capt. Leslie along with Capt. Kenneth Hill were the only casualties and they crashed evading hostile fire.

His widowed wife, Lisa was pregnant at the time of his death with their daughter, Stephanie. They now live in the Baton Rouge area. Capt. Leslie is buried at the Arlington National Cemetery. Stephanie (who was named after her father) once told him something at a special presentation that really struck him, he recalls.

“She said that the way you can help is that every time she passes a house and sees a flag flying that it touches her heart and she knows that the flag is a representation of her what her father was,” Thomas said.

He went on to say, ” What really drives me doing this is back in 1920 Calvin Coolidge when he was nominated for Vice-President in a statement said, ‘The country which forgets its defenders itself will be forgotten.’ Memorial Day is so we can honor those who didn’t come home.”

Doug Thomas is dedicated to preserving and honoring our veterans and their history. He runs a website called neworleanshonor.com, where he photographs and records the GPS locations of every gravestone of a veteran at the New Orleans-area cemeteries.

A special flag raising ceremony was held at St. Bernard Memorial Gardens on Sunday. Here is some video from the special event to honor those fallen heroes.

Parents can take protected leave from work while kids are learning from home, Oregon agency says