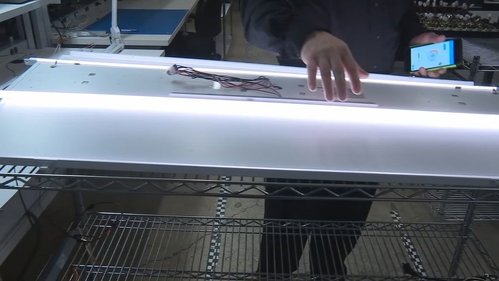 Ultraviolet light has been used to kill bacteria and viruses for years but it’s dangerous for human skin and eyes.

HILLSBORO, Ore. (KPTV) -- In a Hillsboro manufacturing facility, workers are trying to churn out prototypes as fast as possible for a combination LED and ultraviolet lighting system they hope will soon become a new weapon in the fight against COVID-19.

“We think it’s a game-changer right now in this environment,” said Lights There director and co-founder, Thomas Adkins. “It’s nothing new that UV is out there,” Adkins added. “We’re just packaging it in a way that protects the human.”

Adkins told FOX 12 his company has been working on ways to use UV light to kill germs for years, then the pandemic happened.

“This fast-tracked our company and our development,” Adkins said.

Recently, FOX 12 visited the facility where the prototypes are in the works and saw a demonstration of how the lights would work.

“This is a lighting trough, this is typical,” said Lights There Operational Director Steve Daniel, as he held a trough. “We have an LED lighting fixture which is typical in an office or a hospital.”

“What we’re doing is creating a chamber behind the light, so there’s an area in here where we’d have small fans,” Daniel continued. “The air comes in, goes through the UV kill zone, it comes back out and it’s exhausted but none of the UV light gets out of the fixture.”

Lights There claims a typical office room could have all its air sanitized safely in an hour as it is pulled through the system.

“What we want to do is kill the viruses while they’re still in the air, before they’ve even settled onto surfaces,” Daniel said.

Ultraviolet light has been used to kill bacteria and viruses for years but it’s dangerous for human skin and eyes.

“You do have to be careful that you don’t expose people to this germicidal UV light because it’s a health hazard,” said Dr. David Brenner, director of the Center of Radiological Research at Columbia University.

Brenner is making headlines for the university’s work studying a wavelength of UV light thought to be safe for humans.

It’s called "Far-UVC light" and Brenner has been experimenting with the wavelengths for years to see if it could be applied to fight the flu in high-traffic areas like buses, airplanes, hospitals and clinics.

“We think that it has all the killing potential of any type of germicidal UV light but uniquely it’s safe for human exposure,” Brenner said. “You can actually have these lights open and exposed in the ceiling.”

Brenner hasn’t seen the enclosed UV system that Lights There and Northwest Innovative Technologies is working on, but spoke to FOX 12 about UV technology in general.

“This type of approach has been around for at least 20 years and has been tried many times and sometimes, quite successfully,” Brenner said.

“If it’s set up right, it can certainly work,” Brenner said of Lights There’s design. “There’s always an issue with these systems, is how much light is actually getting out into the room itself? And that limits the intensity of the light that you can put inside this box.”

Then there’s the question as to whether UV light can kill COVID-19. Scientists are still studying the possibility but believe the answer is yes.

Lights There said a patent on its design is pending and it’s in the process of seeking approval from the FDA. The business is also reaching out to universities and labs for independent testing of its product.

They plan to start testing the lights in May and hope to take orders as early as July. They envision installing the light systems in nursing homes, hospitals, clinics and offices.

Firefighters responding to lightning strikes in Siskiyou and Jackson counties

COVID contributes to strained hospital capacity at Asante in Medford