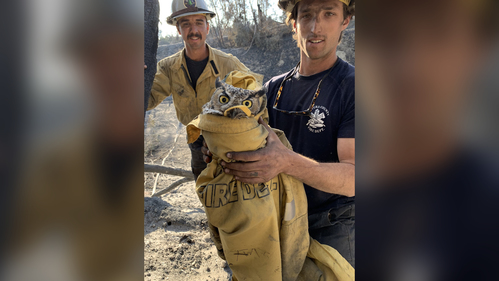 A great horned owl injured during a California wildfire flapped back into the wild Wednesday evening, thrilling the firefighters who rescued him.Early...

A great horned owl injured during a California wildfire flapped back into the wild Wednesday evening, thrilling the firefighters who rescued him.

"We were watching him, it wasn't normal" said firefighter Caleb Amico. "We just tried to grab him and get him to somebody who knew better what to do with him than we did."

The firefighters wrapped the bird in a yellow, flame-resistant firefighter's coat, preventing its talons from tearing up their flesh and keeping the animal's broken bones still.

They brought Ram to Camarillo Wildlife Rehabilitation, where the center's director, Nicky Thole, discovered the bird suffered from smoke inhalation and a fractured coracoid. On an owl, that's a strong bone that connects the cranial edge of the sternum to the shoulder joint.

The owl had been healing at the rehabilitation center ever since -- devouring five small rats a day -- and preparing to return home.

On Wednesday evening, Ram sprung up, spread his large wings and took off east, toward eucalyptus trees.

There was a sense of gratitude among the group of uniformed firefighters who watched the owl fly again, months after Ventura County was ravaged by wildfires.

"This owl is a huge healing symbol," said Brian McGrath, a Ventura County Fire spokesman moments after Ram took flight. "We have burn scars behind us and now the hills are green, it's beautiful. It just goes to show you when we all work together we can heal each other after any disaster."