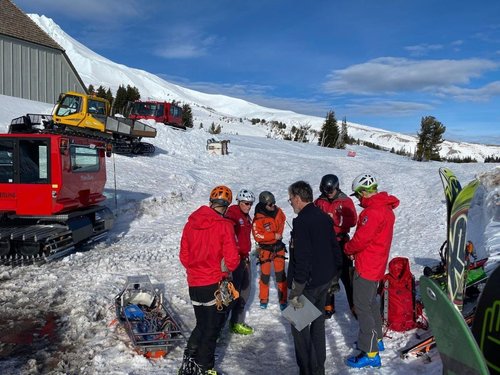 A man is dead after falling on Mount Hood on Tuesday, according to the Clackamas County Sheriff’s Office.

CLACKAMAS COUNTY, OR (KPTV) -- A man is dead after falling on Mount Hood on Tuesday, according to the Clackamas County Sheriff’s Office.

Here’s PIO Sgt. Mendoza with a summary of today’s unfortunate events on Mt. Hood. Thanks to Portland Mountain Rescue, @amr_social and @OregonGuard for your efforts during this difficult operation. pic.twitter.com/BjSdkHfr02

The sheriff’s office says two men climbing Mt. Hood were the first to discover the injured man and one of those men, the climbers, happened to be a member of Portland Mountain Rescue.

The two climbers told dispatchers they found the injured man who appeared to have fallen, at an elevation of about 9,400 feet, near a part of the mountain known as Illumination Saddle.

“He was alive at that point. They were trying to stabilize him when they called 911,” said Sgt. Marcus Mendoza with the Clackamas County Sheriff’s Office.

Search and rescue climbers made their way up the slopes above Timberline Lodge, but by the time they reached the man, he had died from his injuries.

The rescue then became a recovery mission.

“I could see the faces of the rescuers, the disappointment when they found out this had turned into a recovery,” Mendoza said.

According to the sheriff’s office, the man had ski boots on when the climbers found him, and it appeared he had been backcountry skiing.

Search and rescue team members came back down the mountain a little before 7 p.m., with heavy hearts.

“This kind of mission where it starts as a rescue and our people were giving patient care and it doesn’t end well, that’s super hard for us. Our thoughts and prayers go out to the family,” said Mark Morford with Portland Mountain Rescue.

Investigators are still trying to find out the identity of the man who died. They say it appears he was skiing alone when he fell.

Illumination Saddle in the area was closed while law enforcement was on the scene. No additional information was immediately available for release.

UPDATE: Search volunteers set off for the recovery scene after the snowcat drops them off at the top of Palmer, at 8,540 feet. pic.twitter.com/EvVpSyquxK

Firefighters save home from burning down on Thanksgiving