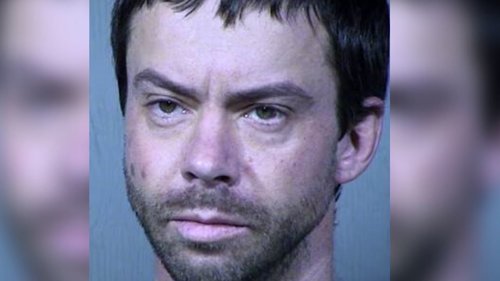 A Phoenix man is accused of feeding meth to his neighbor's two dogs. One of the two dogs did not survive.

PHOENIX, AZ (KPHO/KTVK ) -- A Phoenix man is accused of feeding meth to his neighbor's two dogs. One of the two dogs did not survive.

Jeremiah Allen Olp, 42, faces felony charges of intentional cruel mistreatment of an animal, and killing an animal without the owner's consent.

Police say the incident happened on Wednesday afternoon in a neighborhood near Cave Creek Road and Union Hills Drive. According to the police report, Olp was seen reaching into his neighbor's yard and "giving something to her dogs."

But when Olp noticed his neighbor watching, police say he ran inside his mobile home.

The victim immediately noticed her dogs acting strangely, and she called police. When officers arrived, they found her two dogs in distress. A large brown and white dog was foaming at the mouth and couldn't stand, and a small grey dog was panting and foaming at the mouth. The dogs were rushed to an emergency vet.

According to the police report, tests showed that both dogs had been given meth. The large dog later died.

Olp's bond was set at $10,000. He is due in court Feb. 27 for a status conference and again on March 2 for a preliminary hearing. The police report indicates that Olp has 3 prior felony convictions. Six other times, police say he had failed to appear in court.

Parents can take protected leave from work while kids are learning from home, Oregon agency says