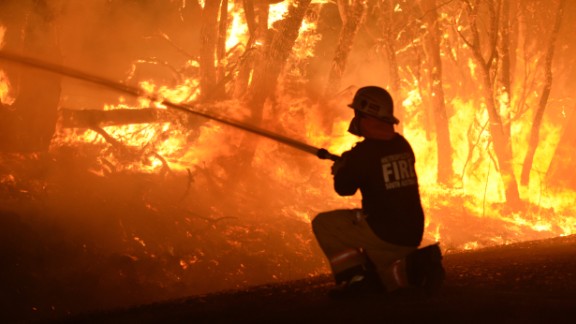 Tennis star Nick Kyrgios has said Australian Prime Minister Scott Morrison was 'far too slow' reacting to the wildfires devastating large parts of the country and has described addressing the climate crisis as an 'urgent' matter.

A leading voice in his sport's drive to help raise money for relief efforts, Kyrgios last week pledged to donate $140 ($200 AUSD) for every ace he hits at upcoming tournaments -- a deed which has sparked similar gestures from fellow players and tournament organizers in the country.

Writing in AthletesVoice, the world No. 29 said: 'As the leader of our country, I don't think Scott Morrison has done enough to be honest.

'Right now, nothing is more important than helping these people and putting the fires out. So, if I could say anything to our politicians it's imagine you're in the same position as these people who have been impacted.'

At least 27 people have died nationwide during this fire season. Nearly 18 million acres of land has been burned -- most of it bushland, forests and national parks, which are home to the country's native wildlife.

Kyrgios, 24, hails from the nation's capital Canberra, a city where the air quality was among the worst in the world earlier this week. While the fires have touched every state in Australia, New South Wales has been the hardest hit.

'For now, politics shouldn't matter. We are where we are, and we've just got to get in and help. But for the future, after this emergency situation eases a little, I think we need to make some changes,' Kyrgios continued.

'I think a lot about climate change and the impact that it's having on the environment. The time will come when our leaders will need to sit down and figure out what we can do to protect our environment. It's urgent that we find a solution.'

Morrison has faced heavy criticism for his climate policies and response to the wildfires as well growing anger and frustration from the public as the fires continue to spiral out of control.

The media team of the Australian PM and Cabinet didn't immediately respond to CNN's request for comment regarding Kyrgios' comments.

'Putting it all on the line'

Better known by some for his on-court misdemeanors than title wins, Kyrgios is currently competing in the ATP Cup and has helped Australia reach the semifinals of the inaugural tournament. He had to fight back the tears earlier on in the event when asked during an on-court interview about the bushfires.

Though regretting not 'doing something sooner,' Kyrgios said he was now intent on using his platform to make a difference.

'These fires have been burning since September and I was seeing people being affected by this disaster every day, feeling helpless,' he said.

'I realize now that I'm blessed to have the platform that I do, so I can help make a difference because there are many things that are more important than sport. That's what I choose to focus on.

'My biggest inspiration this summer is our firefighters. They're the most important people we have on our side right now. They put my job as a tennis player into perspective, that's for sure.

'Seeing what they have to deal with out there, I don't think our firefighters will ever receive enough praise. They're putting it all on the line for every Australian, for our country and for our animals. There's no greater example of selflessness than that.'

A Memorial Day ceremony without a crowd