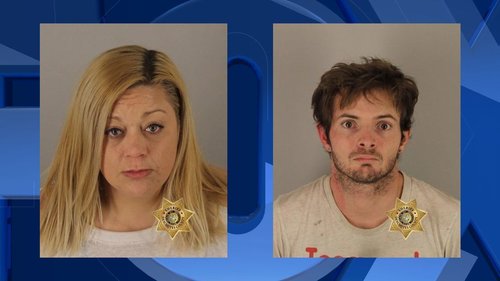 A 15-year-old girl missing from the Portland area was rescued by Bend police following a traffic stop which turned into a human trafficking investigation on Christmas Eve.

BEND, OR (KPTV) -- A 15-year-old girl missing from the Portland area was rescued by Bend police following a traffic stop which turned into a human trafficking investigation on Christmas Eve.

According to the Bend Police Department, at about 1:20 p.m. Tuesday, officers conducted a traffic stop on a stolen vehicle, a silver 2009 Dodge Charger, near the intersection of Southeast Murphy Road and Southeast Country Club Road in Bend.

Inside the car were 40-year-old Portland resident Jennifer Johnson, 29-year-old Gresham resident Tyler Ford, and a 15-year-old girl from Portland. Police say the teenager was a missing person out of the Portland area.

Inside the car, officers found heroin and methamphetamine, along with numerous stolen and forged identification documents. Police say several of the recovered documents were linked to thefts in the Portland area.

Police say Ford was found to be in violation of a restraining order for being in contact with the 15-year-old in the car.

During the course of the investigation, police say they developed reason to believe the teen was being groomed for work in the commercial sex trade. She is now safe.

No one was injured during the investigation.

Police say Johnson faces charges of unauthorized use of a motor vehicle, identity theft, forgery in the first degree, criminal possession of a forged instrument, prostitution and unlawful possession of methamphetamine.

Both Johnson and Ford were lodged at the Deschutes County Jail.

These stunning pictures captured Comet Neowise soaring through the sky. Here's how you can see it for yourself

Rogue Retreat speaks out after homeless man killed in stabbing

California Governor rolls back reopening throughout the state