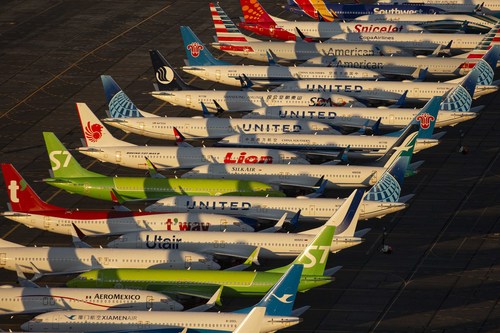 Boeing's 737 Max crisis keeps getting worse and worse. And there is no clear end in sight.In March, following the second of two fatal crashes that killed a total of 346 people.

Boeing's 737 Max crisis keeps getting worse and worse. And there is no clear end in sight.

In March, following the second of two fatal crashes that killed a total of 346 people, Boeing promised a fix would be in place "in the coming weeks." The company was wrong on the timing, and now there's no telling when the 737 Max jets will fly again.

On Monday, the company suspended production of the jets. While the planes may be airborne sooner, analysts estimate that it could be well into 2022, maybe even 2023, before Boeing is able to put its 737 Max problems behind it.

As recently as last week, Boeing was insisting that it could get approval for the plane to fly again by the end of this year. Then FAA administrator Stephen Dickson said there were too many steps to complete to grant an approval until sometime in 2020. That prompted Boeing to announce Monday that it will temporarily halt production of the 737 Max, starting next month, for an undetermined length of time.

When will the Max fly again?

Analysts say it's difficult to come up with an estimate for when the Max might gain approval to fly again, due to the lack of details from Boeing or the FAA. All the agency and company will say is that they are working to first make sure the plane is completely safe .

"You get little snippets of information. I would say mid-February is a guess, but it could be March," said Cai von Rumohr, aerospace analyst with Cowen. "It's pretty hard to say it will be X or Y date."

Ronald Epstein, analyst with Bank of America Merrill Lynch, said he's now expecting approval around March 1, but he could see it going as late as May.

How long to deliver the planes it has built?

Boeing continued building the planes since the grounding, despite being unable to deliver them to customers. That left the company unable to get most of the money for the sales, because airline customers pay the bulk of what's owed upon delivery.

The company has about 400 completed planes parked in Washington State and Texas awaiting approval to fly in commercial service. Boeing says it expects it will be at least 2021 before it can deliver the backlog to customers, but analysts think it could stretch into at least mid-2022, depending on when the company starts building the jets again.

Part of that backup is because airlines can't take immediate delivery of all of the jets Boeing has built for them -- they need time to integrate the planes into their fleets.

"Two or three planes per airline per month would be a pretty aggressive schedule," Epstein said.

And the process of delivering the jets will be time consuming, especially since the FAA itself will now certify each plane individually. In the past, Boeing was allowed to sign off on the jets as they rolled off the assembly line.

"That's a lot of planes to deliver. You've got to do pre-delivery checkouts. You've got the FAA looking over their shoulder," said von Rumohr.

Will there be layoffs?

For now at least, Boeing will keep all of its employees on the payroll. Von Rumohr said that's partly an indication of the strength of the current job market, with national unemployment at a 50-year low, and lower still in the Seattle area at 3.3%. Boeing doesn't want to risk losing the employees it will need to restart production.

What happens with Boeing's suppliers, though, is less clear. Several said Tuesday that they are still waiting for guidance from the company. Analysts believe that the company will have to provide some financial support to its suppliers to ensure they're ready when production on the 737 Max starts up again.

How much will it cost Boeing?

Even though Boeing will save money by shutting production, it will still incur significant costs while its assembly lines are idle.

"We estimate that Boeing is burning nearly $2 billion per month on the Max but this will not drop to zero during the halt," said Seifman in his note. "For now, we assume about 50% of supply chain costs hang around, resulting in monthly cash burn that is still solidly greater than $1 billion."

Boeing has already set aside $5 billion to compensate airlines for the groundings. But that is likely only a fraction of what the final cost will be. The company said it will give a financial update when it reports fourth quarter results. Epstein estimates the 737 Max grounding will eventually cost the company about $14 billion.

The good news for Boeing is that it can likely afford this kind of financial hit. It has a healthy balance sheet and access to capital markets needed to raise funds, and a better credit rating than its airline customers.

The hit to the US economy

Even so, the shutdown is a major event that eventually could affect not just Boeing and the airlines but also spread to nation's economy. If it lasts through March, it could trim about a 0.5 percentage points off the US gross domestic product in the quarter, according to estimates from several economists. The economic hit could be even greater if it starts to result in layoffs.

"Boeing's decision to halt production of the 737 Max aircraft could deliver a big hit to the manufacturing sector just as prospects were beginning to brighten," wrote Michael Pearce, senior US economist at Capital Economics.