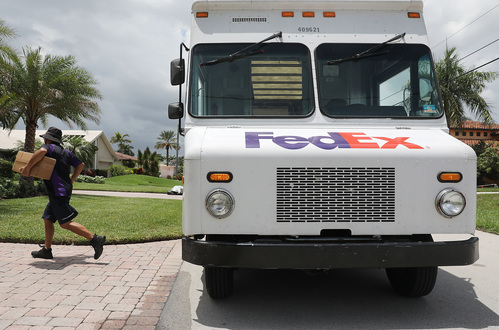 Amazon will no longer allow its third-party sellers to use FedEx's ground delivery to ship Prime packages, marking a change that could affect small businesse...

Amazon will no longer allow its third-party sellers to use FedEx's ground delivery to ship Prime packages, marking a change that could affect small businesses and pricing for consumers.

The move was highlighted in an email, obtained by The Wall Street Journal, reportedly sent to Amazon's merchant partners on Sunday.

The email noted performance declines as the reason for the decision to block FedEx Ground, according to the Journal. The ban will reportedly take effect this week and last 'until the delivery performance of these ship methods improves.'

As of September, Amazon no longer uses FedEx for its own deliveries but it had allowed third-party sellers to use it. Amazon did not release a statement but will still allow merchants to use FedEx's more expensive Express service for Prime orders and Ground for non-Prime shipments, according to Amazon.

FedEx said in a statement to CNN Business that the decision only affects a small number of shippers. But it said the move may impact these small sellers' ability to manage their businesses by limiting their options 'on some of the highest shipping days in history.'

The move comes as the holiday season — a time when more packages are shipped than at any other point of the year — hits its peak. It's also a time when carriers face inclement weather, which can affect shipping times, and this year there are fewer days between Thanksgiving and Christmas, meaning more volume over a shorter time span.

Amazon's focus on speeding up delivery times and its aggressive work to beef up its own shipping network threaten established shipping companies such as FedEx and UPS.

FedEx has denied that parting ways with Amazon is bad for its business, citing its ability to focus on other e-commerce partnerships. FedEx has deals with Walmart and Walgreens for next-day shipping and a partnership with Target that allows it to use stores as local shipping hubs.

Pet of the Week: Adita