It's official: Cyber Monday is having its biggest sales day ever 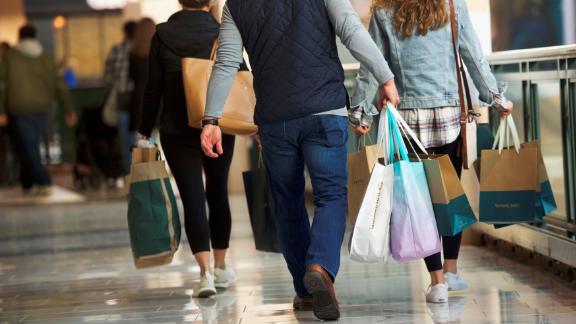 Moody's Vice President Charlie O'Shea says early sales data is encouraging but "we have to pull back from the traditional gauges that we are using to evaluate the holiday."

Black Friday was huge, but Cyber Monday will be even bigger.

Americans will spend a record amount of money this Cyber Monday following an already record-breaking Black Friday and Thanksgiving, according to three different sales reports.

Adobe Analytics projects that Monday will be the largest online shopping day in US history with $9.4 billion in sales — a 19% increase from last year.

So far, sales have surpassed $470 million and Adobe expects the final four hours of the day (10 pm ET to 2 am ET) will account for 30% of the day's revenue. Around $11 million will be spent per minute in the 11 pm ET hour Monday.

This increase in sales can be attributed to two factors: Severe weather across the country, which is forcing people to stay home, and a shorter holiday shopping season. Adobe is also predicting a major year for shopping on mobile devices.

"Consumers are reimagining what it means to shop during the holidays, with smartphones having a breakout season as well," Taylor Schreiner, head of Adobe Digital Insights, said in a press release. "We expect that consumers will spend $14 billion more this holiday season via their phones."

Americans spent $7.4 billion on Black Friday and $4.2 billion on Thanksgiving. Both were increases of 20% over last year, according to Adobe.

Salesforce also projects new records for Cyber Monday with Americans spending $8 billion, a 15% increase over last year. The sales extravaganza is also taking off on a global scale, with sales for Monday growing 12% over last year to $30 billion.

Roughly 75% of shopping done over the previous weekend was on a mobile device, which Salesforce said was "another groundbreaking period" for mobile.

Shopify, an online sales platform that is used by more than 1 million merchants, said that Monday's global sales data has already surpassed $1.5 billion. That is more than the sales from the full weekend last year. Mobile was also a popular way for shoppers to buy, according to Shopify with 70% sales transactions on portable devices.

The shorter holiday season is sending retailers scrambling to offer deep discounts before Christmas. Jason Woosley, Adobe's vice president of commerce product and platform, previously told CNN Business that he estimates consumers will spend $29 billion online between Thursday and Monday. That five-day "Cyber Week" period should account for a 20% chunk of the $143.8 billion in online sales Adobe predicted for this holiday season.

The breakout shopping hits on Black Friday of this year were the Nintendo Switch, sports-centric video games like NBA2K and Apple AirPods Pro, according to Wedbush Securities analysts.