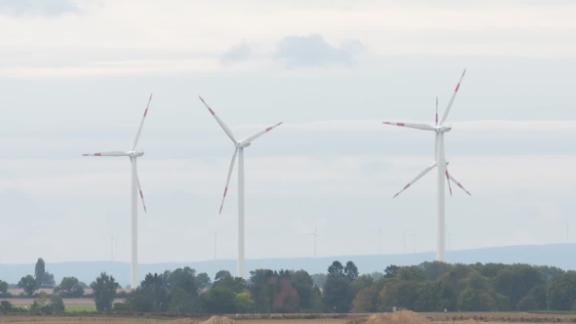 In Germany, the energy landscape is changing. As the government moves away from nuclear and coal, renewables are becoming all the more crucial. Statkraft, a Norweigan firm, is operating the biggest virtual power plant in Europe, which connects over 1,500 wind, solar and hydropower producers through an AI platform.

Virtual power plants could solve one of renewable energy's most vexing challenges: the weather.

By supplying electricity from renewable sources even when the sun isn't shining and the wind isn't blowing, virtual power plant technology could help tackle the climate crisis.

"If you can't rely on renewable energy and other technologies to provide the energy you need in a controllable way then you are always going to have to carry fossil fuel plants to make up for the unpredictability," Phil Taylor, professor of energy systems at Newcastle University in England, told CNN Business.

Conventional power plants can account for fluctuations in demand and supply by, for example, burning more coal, Taylor said. But clean energy sources, such as wind farms and solar plants, are weather dependent and therefore much more difficult to control, he said.

Virtual power plants attempt to solve that problem by connecting disparate sources of renewable production, generation and storage. By pooling those resources, engineers can make them behave like a conventional power plant.

For example, a virtual power plant might be connected to 10 geographically dispersed wind farms to smooth the variability in output of each one. It could also include an energy storage component, so that if production from the wind farms outstrips demand a fleet of batteries can be charged so they can supply more power later when required. Other features that encourage consumers to optimize their energy use can also be incorporated.

"By controlling all these things in a coordinated way, [virtual power plants] can begin to look like conventional power plants," said Taylor.

Norwegian company Statkraft has been running one of Europe's biggest power generation facilities in this way since 2011.

The virtual power plant, in Germany, has capacity greater than 12,000 megawatts and could theoretically power 5 million homes.

It uses a cloud-based artificial intelligence platform to connect more than 1,500 wind, solar and hydropower plants across Europe with electricity generation and storage facilities, such as batteries.

Power generation forecasts and actual electricity production data are continuously fed into the virtual power plant from the connected plants. This is supplemented with market prices for energy, enabling Statkraft to match demand with supply in real time.

When there is excess electricity supply, production at plants can be throttled or energy can be stored for use at a later date. This ensures smaller producers always have a market for their power and helps to avoid negative energy prices.

"We can connect batteries from Spain with wind farms in Germany, and that makes it scalable," Andreas Bader, vice president for sales at Statkraft told CNN Business.

Virtual power plants could over time make a considerable contribution in the transition to a low carbon future, but they are not without weaknesses, Taylor said.

For example, the number of entities involved in a virtual power plant introduces complexity in that separate commercial agreements are needed for each one. They also rely heavily on software systems for data collection and communication, making them vulnerable to cyber attacks.

Cyber attacks are "a threat to the energy grid worldwide," a spokesperson for Statkraft said.

"Similar to hacked conventional power plants, a hacked [virtual power plant] with multi-megawatt power could have serious effects on the power grid," the spokesperson said, noting that the company is investing heavily in cyber security.