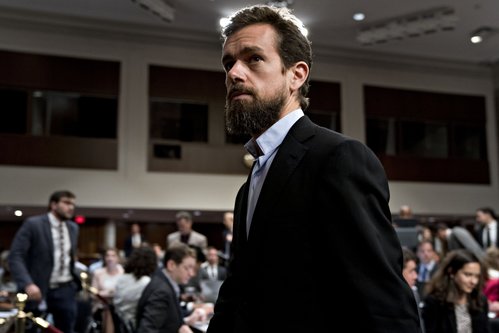 'We've made the decision to stop all political advertising on Twitter globally. We believe political message reach should be earned, not bought,' Dorsey tweeted.

A final note. This isn’t about free expression. This is about paying for reach. And paying to increase the reach of political speech has significant ramifications that today’s democratic infrastructure may not be prepared to handle. It’s worth stepping back in order to address.

'A political message earns reach when people decide to follow an account or retweet. Paying for reach removes that decision, forcing highly optimized and targeted political messages on people. We believe this decision should not be compromised by money,' he added.

Twitter's chief financial officer, Ned Segal, tweeted Wednesday that the company made less than $3 million from political ads in the 2018 cycle.

'This decision was based on principle, not money,' he said.

Dorsey's comments puts him at odds with senior Facebook executives, including Mark Zuckerberg and Sheryl Sandberg, who have vigorously defended Facebook's policy of not fact-checking political ads.

'In a democracy, I don't think it's right for private companies to censor politicians or the news,' he said. Zuckerberg added that he will 'continue' to evaluate whether it is beneficial to allow political ads on Facebook, but that so far he has concluded that permitting political advertising is the better choice.

Political advertising will account for less than 0.5 percent of next year's revenue, Zuckerberg said on the call, suggesting that despite the media controversy over Facebook's policies, the company benefits little financially from the stance. On Wednesday, Facebook reported quarterly advertising revenues of $17.38 billion, up 28 percent over the same period last year.

In a speech in Washington D.C. earlier this month, Zuckerberg said, 'Given the sensitivity around political ads, I've considered whether we should stop allowing them altogether. From a business perspective, the controversy certainly isn't worth the small part of our business they make up. But political ads are an important part of voice — especially for local candidates, up-and-coming challengers, and advocacy groups that may not get much media attention otherwise. Banning political ads favors incumbents and whoever the media covers.'

Some of Facebook's own employees took issue with that reasoning in a letter sent to Zuckerberg and other company leaders that was reported by The New York Times earlier this week. They wrote, 'high-profile politicians can out-spend new voices and drown out the competition' on the platform.

Political candidates were quick to jump on the Twitter news.

'When faced with a choice between ad dollars and the integrity of our democracy, it is encouraging that, for once, revenue did not win out,' said Bill Russo, a spokesman for Vice President Joe Biden's presidential campaign. Earlier this month, Biden's presidential campaign wrote to Twitter and other social media companies asking them to stop running an ad that falsely accused Biden of corruption over his role in Ukraine policy during the Obama administration.

'This is yet another attempt to silence conservatives,' he said in a statement, 'since Twitter knows President Trump has the most sophisticated online program ever known.'

In a lengthy series of tweets about Twitter's decision, Dorsey said that 'while internet advertising is incredibly powerful and very effective for commercial advertisers, that power brings significant risks to politics, where it can be used to influence votes to affect the lives of millions.'

Dorsey said Twitter will also stop running issue ads, which Twitter characterizes as ads that 'advocate for or against legislative issues of national importance.'

In his speech in Washington, Zuckerberg cited issue ads as another reason not to ban poltiical ads, 'Even if we wanted to ban political ads, it's not clear where we'd draw the line. There are many more ads about issues than there are directly about elections. Would we ban all ads about healthcare or immigration or women's empowerment?'

Dorsey said the company would share more details about the policy on November 15th and would stop accepting political ads on November 22nd.

A Georgia bar owner removed $3,714 worth of bills stapled to the walls to give to her unemployed staff

Why is COVID-19 testing so complicated?

April 9th - Pet of The Week

Smokejumpers use their sewing skills to make homemade face masks

A closer look at what makes COVID-19 testing so complicated