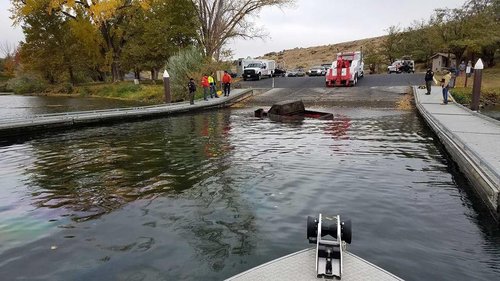 The missing person was Maynard Koen, who was born in 1911. He was reported missing in August of 1993.

UMATILLA COUNTY, OR (KPTV) -- The Umatilla County Sheriff's Office said a submerged pickup truck found in the Columbia River last week is connected to a Washington man who was reported missing 26 years ago.

On Thursday, recreational scuba divers discovered a submerged Ford Ranger pickup with Washington license plates near the Hat Rock State Park boat launch. The vehicle was in about 20 feet of water, just past the end of the docks.

The sheriff's office said dispatch checked the license plate and discovered the pickup truck was connected to a missing person's case out of Prosser, Washington.

The missing person was Maynard Koen, who was born in 1911. He was reported missing in August of 1993.

After the vehicle was removed from the river, the sheriff's office said skeletal remains were located inside. A driver's license issued to Koen was also located.

The sheriff's office said that it appears the pickup truck was submerged in the location at or around the time Koen was report missing based on the condition of the vehicle.

Owners of Montague restaurant defy order to halt dine-in again: 'It's how we make a living'

These stunning pictures captured Comet Neowise soaring through the sky. Here's how you can see it for yourself

Alex Trebek gives an update on his health

Visitation restrictions back in effect