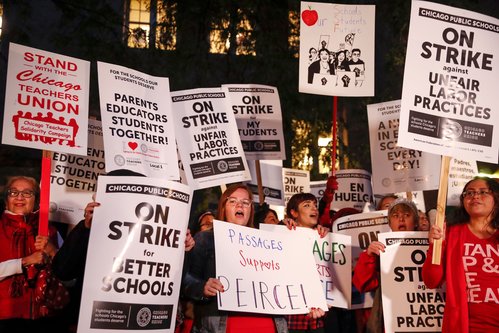 About 300,000 students have no idea when they'll see their teachers again as members of the Chicago Teachers Union...

Moselean Parker's 25 years of simmering frustration have boiled over.

Parker was one of 25,000 Chicago educators who went on strike Thursday, demanding what teachers across the country have been clamoring for: smaller class sizes, more support staff, higher raises and more school funding.

Teachers and staff held a spirited rally and marched in downtown Chicago. But negotiations ended without the two sides reaching a deal, meaning some 300,000 school children will remain in limbo. Classes are canceled on Friday as negotiations continue.

But a senior city official told CNN the two sides are 'still pretty far apart,' and the strike will likely extend through the weekend.

Jennifer Friedhart, a 5th and 6th grade science teacher at Beaubien Elementary, said teachers would rather be in the classroom than on the picket line.

'We should be in the classroom,' said Friedhart, a 15-year Chicago Public School veteran who brought her 7-year-old daughter, Zoe, with her. 'Striking for needs that every school needs, it's worth it.'

In Chicago, the dynamics are different -- and in some cases, dire.

About 75% of students qualify for free or reduced lunch. In some neighborhoods, gangs and violence permeate the streets.

'The violence is because the kids can't read,' Parker said. She's spent her own money buying supplies for her classrooms, but says it's not enough.

'Our students suffer from trauma. They suffer from so many things they need help coping with,' Penn said.

Many child deaths are 'by suicide and by guns. This is a fact in Chicago,' she said.

The school district has offered hundreds more support staff and 16% raises for teachers -- an average of about $19,000.

But teachers say those concessions aren't enough. That means about 300,000 students now have no idea when they'll see their teachers again.

Chicago Mayor Lori Lightfoot said the city has already offered the most generous proposal in the union's history and called for an end to the strike.

'We need to get our kids back in school,' the mayor said Thursday. 'Every day we are out, that hurts our children.'

What's happening to the kids?

Even though classes are canceled, schools will stay open and will provide 'breakfast, lunch, and supper' during the strike, CPS Superintendent Dr. Janice Jackson said.

The campuses are staffed by administrators and employees who aren't part of the union.

But school buses will not be running, and students are not required to go to school.

Dozens of community centers will be open for students, including YMCAs and Boys & Girls Clubs of Chicago.

While many striking teachers are also CPS parents, not all Chicago parents support the strike.

'To me, it's a whole distraction and interruption to the school year,' said Liam Boyd, the father of a 4th-grade son at Blaine Elementary.

Boyd said he's worried about the lost productivity during the strike.

'I don't support the union,' he said. 'I think the school district and the city has been more fair this time and (are) trying to be more fair.'

What the teachers want

The union listed more than a dozen demands for the school district, including firm limits on class sizes, hiring more teachers' assistants and raises for all school employees.

Willie Cousins has worked as a teacher's assistant at Bond Elementary School for the past five years.

'And to make ends meet, I've had to pick up an extra job at Walmart, Food 4 Less, it all depends because of my salary. But I have a family of four that I have to provide for.'

He said the cost of living in Chicago makes it especially difficult to live on an educator's salary.

'We are required to live in the city. So how can I live off of that when skyrocketing rent is unbelievable?' he said. 'Please, we deserve a fair wage in this city.'

Then there's the lack of librarians, bilingual teachers and other support staff.

Nine of 10 majority-black schools have no teacher librarians, and there aren't enough teachers for English language learners in the district, which the union said is 'nearly half Latinx,' the union said.

What the city and school district have offered

Chicago Public Schools has proposed a series of offers, including 16% raises for teachers, or an average of about $19,000.

Chicago's Board of Education released a 71-page counteroffer to the union's demands.

'We have tried to provide the best deal that's fiscally responsible -- that's fair to teacher and fair to taxpayers,' Mayor Lightfoot said.

'It provides a 16% pay raise for all employees. It would lift up lowest-paid workers immediately. On average, support staff will see a 38% pay raise over the life of the (five-year) contract under the current offer.'

The mayor said an additional $400,000 per year will be earmarked 'toward a pipeline for nurses, counselors and case managers.'

'Without question, the deal that we put on the table is the best in the Chicago Teachers Union's history,' Mayor Lightfoot said.

Car chase leads to a three-car collision in White City

A teen raised $10K to install a community baby box. Less than a year later, a newborn was found inside