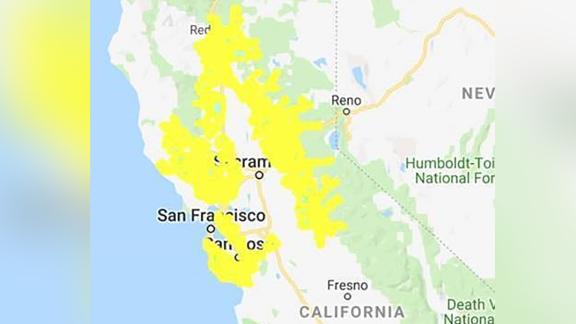 CNN affiliate KGO has the story on the power outages which could affect almost 2 million people across California.

Nearly 500,000 Pacific Gas & Electric (PG&E) customers in northern California will be in the dark starting at midnight Wednesday as the company begins shutting off power in an effort to help prevent starting a wildfire.

Another 300,000 will likely lose power later in the day, for a total of 800,000 customers affected by the shutoff, Sumeet Singh, vice president of the company's Community Wildfire Safety Program said.

Forecasters are warning that many parts of northern California are under extreme fire weather danger with windy and dry conditions forecast for the region.

'We implement this public safety power shutoff as a last resort,' Singh said in a Tuesday news conference. It could take several days to restore power, Singh added, as the company will first conduct safety inspections once the widespread wind event is over.

PG&E has come under fire for its role in a series of catastrophic wildfires across the state. The company has previously said it is 'probable' that its equipment started the 2018 Camp Fire -- the state's deadliest and most destructive blaze -- when a power line touched nearby trees.

An investigation by the California Department of Forestry and Fire Protection found the company responsible for the fire, which killed 85 people and destroyed thousands of structures.

Who will be impacted

The power will be shut off in stages, PG&E said in a Tuesday statement, 'depending on local timing of the severe weather conditions, beginning with counties in the northern part of the state.'

On Monday, San Jose Mayor Sam Liccardo urged residents to prepare to be without power for as long as seven days.

The shutoff will span across portions of 34 northern, central and coastal California counties, he said.

The California Department of Transportation has been working with the utility company to secure backup power generators to keep the Caldecott Tunnel in Contra Costa and Alameda counties and the Tom Lantos Tunnel in Pacifica open, spokesman Bart Ney told CNN.

The Caldecott Tunnel would be closed on State Route 24 and the Lantos Tunnel could close along State Route 1 in Pacifica, CNN affiliate KGO reported.

The Bay Area Rapid Transit (BART) system said in a tweet that it didn't expect to be impacted by the shutoff. BART has portable generators at certain stations and will have personnel monitoring the generators, a Twitter thread said.

Why the weather conditions are important

The conditions that are being forecast for portions of the state 'historically have led to catastrophic wildfires,' the utility giant's senior meteorologist, Evan Duffey, said in the news conference.

And this, he said, is by all metrics 'forecast to be the strongest offshore wind event since October 2017.'

The National Weather Service has warned of strong winds and low humidity running over dry vegetation, which the service said acts as 'fuels.'

'This is a recipe for explosive fire growth, if a fire starts,' the weather service said. 'Have your go back ready.'

The strong winds will begin Wednesday morning and will last through Friday morning, Duffey said during the news conference.

Could take days to restore power

Singh said PG&E has already activated an emergency operation center that is staffed during all hours of the day.

In the news conference, he said some of the utility company's customers may have their power shut off 'even though the weather conditions in their specific location are not extreme.'

'(That's) because of the interconnected nature of our electrical grid and the power lines working together to provide electricity to cities, counties and regions,' Singh said.

And power will take several days to restore as the company inspects its equipment to make sure there's no damage, he said.

'We very much understand the inconvenience and difficulties such a power outage would cause and we do not take or make this decision lightly,' he said. 'This decision ... was really focused on ensuring that we're continuing to maintain the safety of our customers and our communities.'