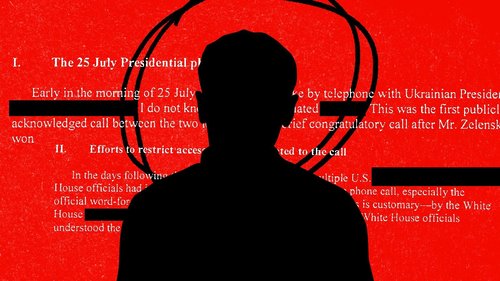 'While the identity of the whistleblower is not publicly known, we do know that he or she is an employee of the U.S. Government. As such, he or she has by law the right—and indeed the responsibility—to make known, through appropriate channels, indications of serious wrongdoing,' the former officials from both Democratic and Republican administrations wrote. 'That is precisely what this whistleblower did; and we applaud the whistleblower not only for living up to that responsibility but also for using precisely the channels made available by federal law for raising such concerns.'

Among the scores of signatories on the letter is former Defense Secretary Chuck Hagel, former CIA Directors John Brennan and Michael Hayden, who is a CNN analyst, and former Director of National Intelligence James Clapper, who is a CNN contributor.

The letter comes amid an intensifying focus over the whistleblower's complaint about Trump's July call with Ukrainian President Volodymyr Zelensky and the actions the White House took to conceal the records of the conversation.

In an attempt to discredit the whistleblower, Trump and other Republicans have launched partisan attacks on the individual, who, according to a source familiar with the ongoing investigation, is a registered Democrat. Trump demanded to meet his 'accuser' face to face. The whistleblower's lawyer wrote a letter to the chairmen and ranking members of the House and Senate Intelligence Committees and acting Director of National Intelligence Joseph Maguire to express 'serious concerns' for his client.

During a congressional hearing last month, Maguire said he was 'absolutely committed' to protecting the whistleblower from retaliation, a point the former officials address in their letter.

The Wall Street Journal first reported on the letter.

'What's more, being a responsible whistleblower means that, by law, one is protected from certain egregious forms of retaliation. Whatever one's view of the matters discussed in the whistleblower's complaint, all Americans should be united in demanding that all branches of our government and all outlets of our media protect this whistleblower and his or her identity,' the letter reads.

'Simply put, he or she has done what our law demands; now he or she deserves our protection.'

Suspect in custody after hours-long armed standoff near Chiloquin

Georgia held a contest for better highway safety signs. The winners are hilarious

A dog gives birth to a green puppy, now named 'Hulk.' Here's the science behind it

A 6-year-old is making clay koalas to raise money for the Australian fires. He's raised over $20,000

2 Honolulu police officers were shot and killed when they answered a call for help. Then the house they responded to went up in flames