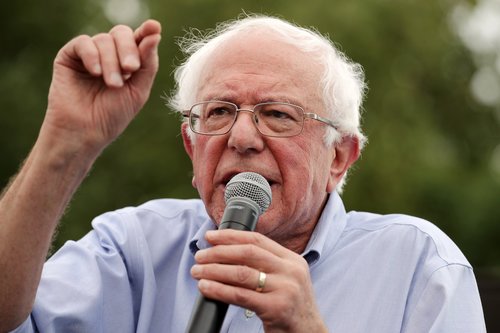 Vermont Sen. Bernie Sanders released a new plan on Monday to tax companies with large pay gaps between their executives and workers.

"The American people are sick and tired of corporate CEOs who now make 300 times more than their average employees, while they give themselves huge bonuses and cut back on the healthcare and pension benefits of their employees," the Democratic presidential candidate said of the plan. "It is time to send a message to corporate America: If you do not end your greed and corruption, we will end it for you."

Corporate pay disparities have come under increasing scrutiny as politicians and individual activists — including, most notably, the heiress Abigail Disney — have called out CEO pay packages at companies that rely on low-wage workers.

The income inequality tax, which comes less than a week after Sanders released a separate wealth tax plan, would penalize companies who have large disparities in compensation between their highest paid officials and median workers. The plan would raise an estimated $150 billion over the next decade, according to a Sanders campaign statement.

The tax kicks in at half a percentage point for companies who pay their chief executive -- or their highest paid employee, if it's not the CEO -- more than fifty times their median worker and caps off at 5 percentage points for companies who pay their top executive as much as five hundred times more than the median employee. This tax applies to all private and publicly held corporations with annual revenue of more than $100 million. The Securities and Exchange Commission requires companies to disclose its CEO to median work pay ratio.

In the release of the plan, Sanders outlined how much this tax would have forced large corporations to pay in taxes.

Calling out large corporations for getting away with paying little in taxes is a central part of Sanders' stump speech. The presidential hopeful will often do a call and response with the audience, asking them how much corporations like Amazon have paid in taxes, to which the audience typically replies "zero" in unison.

Sanders has previously attacked several of these companies for having relatively low minimum wages for their workers.

A year ago, Sanders lashed out at Walmart, McDonalds, American Airlines and several other major firms for paying some employees so little that they have to sign up for government benefits. He introduced a bill that would slap a tax on these companies equal to the value of the public assistance their workers receive.

He has also urged companies to raise their minimum wage to $15 an hour. Some, including Amazon and Disney, did so. McDonalds said earlier this year it would stop lobbying against raising the minimum wage, which is $7.25 an hour on the federal level.

For Sanders, a tax on corporations with large pay discrepancies fits into the larger narrative of his campaign's message of elevating workers' rights and exposing levels of income and wealth inequality.

"This campaign is about transforming this country and creating a government, and an economy that works for all of us, not just the top 1%. This campaign is about ending the grotesque level of income and wealth inequality that exists in this country," Sanders said in Rock Hill, South Carolina, earlier this month. "I want each and every one of you to be thinking hard about whether you are comfortable living in a country where three people own more wealth than the bottom half of American society. Where the top 1% owns more wealth than the bottom 92%."