150 pounds of pot stolen from grower in elaborate heist 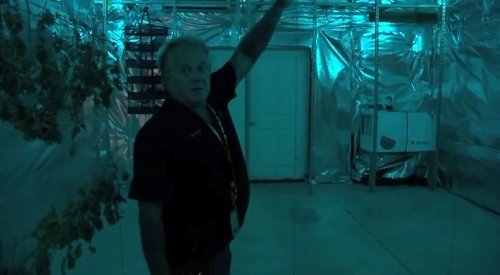 KELSO, WA (KPTV) -- A band of thieves reportedly cut through steel walls of a Kelso marijuana producer and stole 150 pounds of dried pot waiting to be transported to a processing plant.

Kelso police confirmed officers are investigating the heist of roughly $250,000 worth of marijuana.

The facility, Cascade Mountain, is equipped with several surveillance cameras that show the thieves walking around with headlamps and cutting through various walls before breaking into the drying room and scooping the plants into bags.

“I’m still in a little bit of a state of shock,” said manager Mark Michaelson on Tuesday as he showed FOX 12 the nearly empty room.

“This room – clear to the ceiling – was completely full,” Michaelson said.

He added, “They literally cut a hole through the heavy steel siding, sheetrock and all the insulation – cut a hole in and literally crawled like rats through that hole.”

Michaelson said the cameras captured five men and a woman orchestrating the theft early Sunday morning. The facility is located off Parrott Way.

Some of the still images produced from the surveillance video show clear photos of the suspects’ faces.

Michaelson said the harvest took three months to produce and just a couple hours to steal.

“It’s heart-sickening,” Michaelson said. “It was just sickening – almost kind of surreal to walk around and see what they had destroyed.”

Michaelson manages the business, which is owned by his daughter. Michaelson owns another marijuana growing and processing facility in Vancouver.

Michaelson said it’s unclear if his daughter will be able to stay in business after the break-in and theft.

“It’s going to be tough to survive this one,” Michaelson said. He doesn’t expect insurance to cover the loss.

According to the business, a flawed security system failed to notify police of the break-in.

Michaelson believes the thieves were tipped off about the crop.

“They come in literally the day before this stuff was ready to be trimmed and sold – and literally took everything,” Michaelson said. “Do I believe they were tipped off that there was dry product in this facility? 100 percent. There’s no question. The timing was too good.”

Cascade Mountain is offering a $5,000 cash reward for tips to identify the suspects.

Anyone with information on the case is urged to contact Kelso police.

“The bottom line is right now I really want to catch them. I really, really do,” Michaelson said.

OIT knocks off No. 9 Westmont, advances to Opening Round Championship