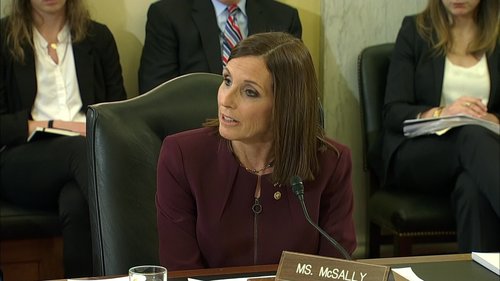 Arizona GOP Sen. Martha McSally plans to introduce legislation next month that would make domestic terrorism a punishable federal crime, an effort that aims to close a loophole in federal authorities' ability to prosecute suspects in domestic terrorism cases.

McSally released a discussion draft of the legislation Wednesday, which her office said would "add specific punishments for acts of domestic terrorism and provide federal law enforcement with new charging options." The legislation would allow federal authorities to charge suspects with domestic terror, criminalize politically-motivated violence and ensure that victims of terrorism are "properly recognized," among other things.

The draft bill comes on the heels of three recent mass shootings in California, Texas and Ohio that left a total of 34 people dead. Authorities are treating the massacre in El Paso, Texas, as a case of domestic terrorism and are considering bringing federal hate crime and federal firearm charges, which carry a possible death penalty. McSally's drafted legislation would allow authorities in future domestic terrorism cases to charge the suspect with domestic terrorism and seek the punishments outlined in the legislation.

McSally's office noted in a statement on Wednesday that under the loophole she's looking to close, "federal law enforcement agencies frequently open domestic terrorism investigations but end up charging domestic terror suspects with other offenses." It added that without the legislation she plans to introduce, it's "more difficult to track acts of domestic terror and reduces uniformity in charging and sentencing."

"Domestic terrorism is in our backyard and we need to call it and treat it under the law the same as other forms of terrorism," McSally, who plans to introduce the legislation in September, said in the statement.

"For too long we have allowed those who commit heinous acts of domestic terrorism to be charged with related crimes that don't portray the full scope of their hateful actions. That stops with my bill," she added. "The bill I am introducing will give federal law enforcement the tools they have asked for so that they can punish criminals to the fullest extent of the law."

McSally will have to defend her seat next year in a special election in which gun control could be a critical election issue. Earlier this year, former NASA astronaut Mike Kelly announced he will seek the Democratic nomination in the election.

Kelly, along with his wife, former Rep. Gabby Giffords, D-Arizona, who survived a shooting in 2011, has been an advocate for gun control since retiring from NASA. Kelly and Giffords formed the organization now called "Giffords" in 2013 in order to combat gun violence after the mass shooting at the Sandy Hook elementary school in Newtown, Connecticut.