Forget touchscreens: This case controls a smartphone with buttons and dials 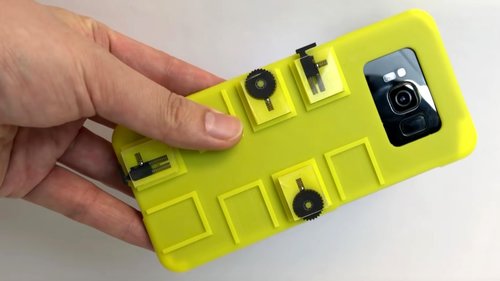 In a world filled with touchscreens, it might feel pleasantly retro to push a physical button or twist a dial to control your smartphone.That's the th...

In a world filled with touchscreens, it might feel pleasantly retro to push a physical button or twist a dial to control your smartphone.

That's the thinking behind a new phone-case prototype with swappable mechanical buttons and dials. The project was created by researchers at Snap — the parent company of photo-sharing app Snapchat — and Columbia University.

The back of the plastic case has special slots that little widgets slide into; they can be used to do things like zoom in and out with a camera app or shoot a photo, as the researchers show in a video.

"We are, as a species, very touchy and feely, and I think we want to be able to not just know that we touch something, but we also like the confirmation of something having happened," Shree Nayar, director of Snap Research's imaging-focused research lab in New York, explained to CNN Business.

Nayar said the project was born out of a desire to give people tactile feedback when touching a phone, while also stopping them from covering the display with their fingers as we tend to do when using a touchscreen. And since so many phones — as well as many other mobile gadgets — have accelerometers these days, the work could be helpful for thinking about how we interact with electronics like tablets and gaming devices, too.

The case and mechanical widgets the researchers built contain no electronics, so neither Bluetooth nor cables help them communicate with the phone. Instead, they take advantage of what happens when you push a button or wind a rotary dial: your finger's force causes the smartphone to move slightly, and this motion can be picked up by the handset's built-in accelerometer and interpreted as an action by software on the phone.

Since this movement varies slightly depending on the widget you're touching and where it is on the back of the phone, the researchers wrote an algorithm that can determine which widget is doing what. One demo app they built, for instance, shows a user controlling a video game by pressing two different push-buttons on one side of the phone.

The researchers aren't the only ones interested in more old-fashioned ways to interact with electronics. Early next year, Portland software company Panic is planning to release a handheld gaming device, Playdate, that comes with a crank on its side. And consumers apparently still relish a range of vintage electronics, from iPods to instant cameras.

The researchers designed and 3-D printed a prototype of the case with eight slots for the rectangular widgets, and 3-D printed parts for a number of widgets to fit into them that look like buttons and rotary dials. Then they put it on an Android smartphone, along with their demo software that lets the widgets control a camera, game, and virtual saxophone.

A paper about the work, much of which was conducted by Columbia graduate student Chang Xiao while he was as an intern at Snap Research, will be presented next week at the annual computer graphics and interactive technology conference Siggraph in Los Angeles.

But don't expect Snap to release the case and its accompanying mechanical bits as a product anytime soon, à la its video-recording glasses, Spectacles. Nayar said the project was "really sort of an exercise in curiosity," which is, in part, the goal of his lab at Snap Research.

That said, the researchers are giving anyone who's interested in making this reality (and who is somewhat technically savvy) a bit of help: on the project website, you can find links to 3-D models for making the button and knob widgets yourself.