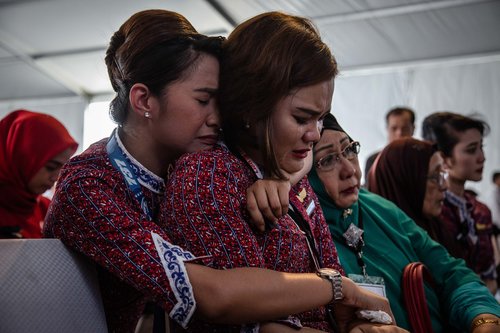 Boeing has shifted its stance on how it plans to compensate families of those who died in...

Boeing has shifted its stance on how it plans to compensate families of those who died in two 737 Max crashes in the last year.

The company announced Wednesday that it has set aside $50 million to give directly to victims' families. Boeing had previously said it would pay out $100 million to local nonprofits and community groups that will distribute the funds to the relatives of the 346 people who died.

To facilitate the distribution of funds, Boeing has hired attorney Kenneth Feinberg and his colleague, Camille Biros, to come up with a formula to determine who gets how much money. Feinberg's Washington-based firm has overseen distribution to victims of several major events, such as the terrorist attacks on September 11, 2001, and the BP Deepwater Horizon oil spill.

Some family members had criticized Boeing's initial commitment to distribute funds. At a congressional hearing Wednesday on the 737 Max crisis, Michael Stumo, the father of victim Samya Stumo, said Boeing's initial announcement "seemed like a PR stunt to us."

Bob Clifford, who represents dozens of families affected by the March 2019 crash of a Boeing 737 Max in Ethiopia, told CNN Business earlier this month that the $100 million offer from Boeing was "disingenuous" and "vague," noting the litigation process could bear out new information about the crash.

Asked Wednesday about Boeing's latest announcement, Clifford said that picking Feinberg to distribute the funds was "the one thing Boeing has gotten right." But Clifford still said he took issue with Boeing's process.

"Half of the fund for relief is a problem," he said in a statement to CNN Business. "Even giving Boeing its due, it missed its mark because they added a new layer of confusion to expedient and efficient relief to these families."

Clifford added that if Boeing "wanted to give real relief to the families, they should work with the insurance partners of Ethiopian Airlines to expedite payments to the families."

"Instead, they are now making it harder," he said, adding that he intends to notify Feinberg about these issues.

At the beginning of July, Boeing said it would give $100 million to support education, including college tuition or other schooling expenses for children of victims, and "hardship or living expenses for impacted families." Boeing said Wednesday the $50 million will come from that $100 million compensation fund, and it is designed to provide near-term financial help to the victims' families.

"The tragic loss of life in both accidents continues to weigh heavily on all of us at Boeing, and we have the utmost sympathy for the loved ones of those on board," said Dennis Muilenburg, Boeing's CEO, in a statement. "Through our partnership with Feinberg and Biros, we hope affected families receive needed assistance as quickly and efficiently as possible."

Boeing noted people who accept money from the compensation fund will not be required to give up the right to pursue legal action against the company. The spokesperson declined further comment on Boeing's ongoing lawsuits.

Boeing's 737 Max jets were grounded worldwide in March after one of the aircraft, flown by Ethiopian Airlines, crashed shortly after takeoff. It followed a crash in late 2018 of a 737 Max flown by Indonesian airline Lion Air.

The company is facing multiple lawsuits and federal investigations related to the 737 Max. The grounding has forced airlines to cancel hundreds of flights each week, and it's not clear when the 737 Max, which is Boeing's top-selling plane, will be cleared to fly again.

Boeing has pledged to deliver a software fix to address issues with its automatic safety features that were linked to both crashes. Experts had expected the jets to be back in the air in August — but those efforts were delayed after another potential issue with the 737 Max was discovered during testing.

-- CNN's Gregory Wallace and Jill Disis contributed to this report.