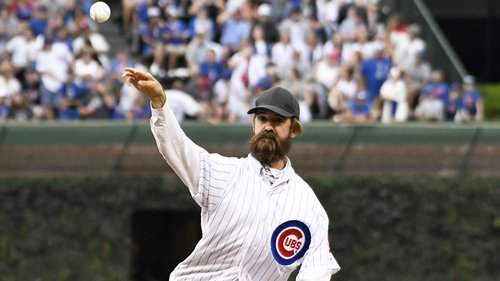 The man who caught Chance the Snapper -- the...

The man who caught Chance the Snapper -- the alligator that shut down part of Chicago's Humboldt Park for days -- is a new hero in the Windy City.

With the task done, Chicago has pulled out the red carpet to honor him.

He threw out the first pitch at Wrigley Field on Tuesday night as the Chicago Cubs hosted the Cincinnati Reds, with a toss that would make 50 Cent jealous.

Afterward, he was able to watch the game from the stands as the Cubs defeated the Reds 4-3.

Robb was also invited to turn on the water at Buckingham Fountain in Grant Park on Wednesday morning.

'When I came here, I had a plan where I was going to try to get in here, accomplish the job I had set forth from the city of Chicago, and get out of here, and nobody ever knew I was here,' Robb said during a press conference in Grant Park. 'The way it turned out, it worked out too, and it's been really a complete blessing.'

It's Robb's first time in Chicago. He hails from St. Augustine, Florida, and owns Crocodilian Specialist Services. Officials hired him and flew him into Chicago over the weekend to capture the gator, which was first spotted in Humboldt Park's lagoon last week.

Chicago's top animal control official has said officials believe the reptile was brought to the lagoon by someone who owned it. It's illegal in Illinois to own an alligator.

The gator came to be known as Chance the Snapper, playing off the name of one of Chicago's best known rap artists.

Pier 1 is officially going out of business