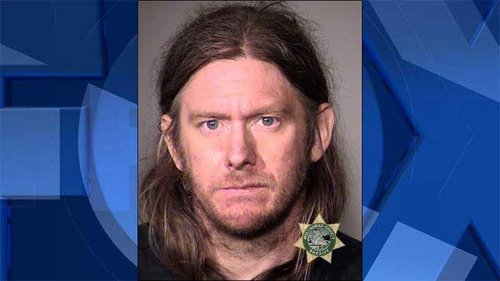 GRESHAM, OR (KPTV) -- A man and his cat made themselves at home during a burglary in Gresham, according to police.

Officers responded to a report of a burglary in progress near Southeast 180th and Alder Street at 3:45 p.m. Sunday.

The homeowners reported finding damage to their home and items inside that didn’t belong to them. They then heard noises from the crawl space beneath the house.

They opened the crawl space door and a cat came out wearing a “cat shirt,” according to officers.

Police said the homeowners believed “something or someone” much larger than the cat was also in the crawl space.

Officers arrived and the suspect, 38-year-old Ryan Douglas Bishop, emerged from the crawl space. The woman who lives in the home pointed out that Bishop was wearing her “Christmas onesie” pajamas.

“Indeed he was. She requested it not be returned,” according to the Gresham Police Department.

Investigators said Bishop and his cat, named Spaghetti, got comfortable during the burglary: He made coffee, ate a cupcake and raided the clothes dryer for a new outfit.

Bishop was booked into the Multnomah County Jail on charges of burglary, theft and criminal mischief.

Animal control was called out to deal with the uncooperative Spaghetti.

Hillary Clinton doesn't have to testify in lawsuit over her emails, appeals court rules