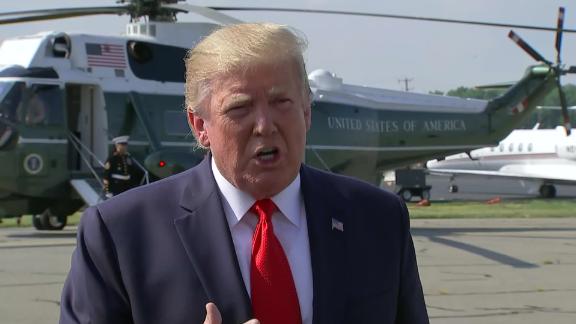 President Trump weighs in on whether female athletes should receive equal pay to their male counterparts following the US Women's World Cup win.

Megan Rapinoe and her team did what Donald Trump told them to do — they finished the job. Now the question is, how will the President honor World Cup winners who have carved out a remarkable political and societal legacy?

USA's win over the Netherlands in the World Cup final in France on Sunday did not just spark celebrations among their fans. It validated the team's status as icons whose willingness to go beyond soccer soundbites inspired youngsters, created critics who chafed at their politics and challenged perceptions of how athletes should behave.

A public feud between Rapinoe and Trump during the tournament pulled her team into the political storm that constantly rages around the President.

But the star forward's success in leading her team to glory made a statement that resonated far beyond partisan politics. The USA team is driving the evolution in women's soccer -- which lacks the support and attention in the game's traditional heartlands in Europe and South America that it has in the US but is beginning to catch on.

And in the United States, the national team is fighting a lawsuit to be paid the same as their male counterparts, becoming an emblem of the wider movement to end the gender wage gap.

The team's triumph also comes as other female athletes, like 15-year-old Coco Gauff at Wimbledon and the five-time world champion USA women's hockey team break their own sporting barriers and confirm the promise of Title IX non-discrimination for female athletes.

Its outspoken members also connect with an era of shifting societal attitudes that led to the #MeToo movement which exposed generations of sexual harassment in business, the media, the arts and Hollywood -- as Democratic women candidates are lining up for the chance to take on Trump in 2020.

On the face of it, the USA World Cup winners ought to be the kind of cause the President can quickly embrace, since they are the epitome of one interpretation of his motto, 'America First.'

But while other key political figures from all sides of the ideological spectrum quickly tweeted rapturous praise, it took Trump several hours to offer his congratulations.

'Congratulations to the U.S. Women's Soccer Team on winning the World Cup! Great and exciting play. America is proud of you all!' Trump tweeted from his golf club in New Jersey.

The President made no mention of an invitation to the White House for the team — the root of his original showdown with Rapinoe — or of the possibility of other honors for the back-to-back World Cup winners. The US delegation to the final in France also lacked a bit of firepower, given that it was led by a comparatively junior official, Karen Dunn Kelley, the deputy Secretary of Commerce.

Trump told reporters Sunday that he would look at a visit by the team but hadn't really thought about it, but he again congratulated the US players.

After Tiger Woods won the Masters in April -- his 15th major championship -- the golf-loving Trump quickly awarded Woods the Presidential Medal of Freedom. He recently announced that Jerry West, a former NBA player, coach and general manager would get the same honor.

Trump in a corner

The World Cup winners have long refused to let their results do all the talking.

'You can't win a championship without gays on your team. It's never been done before, ever,' Rapinoe said, according to several media outlets including the Guardian in the UK last week.

Rapinoe's confidence to voice her political views put her at odds with Trump after Rapinoe said she wouldn't attend a White House celebration if the team won the World Cup.

It led to the extraordinary spectacle of a sitting President publicly remonstrating with the captain of the team wearing US colors at a tournament overseas -- an episode that helps to encapsulate the exposed political nerves of the Trump era and turned into a dividing line between conservatives and opponents on cable TV.

Trump responded to Rapinoe on June 26 in the traditional manner he reserves for his critics.

'Megan should WIN first before she TALKS! Finish the job!' Trump tweeted before inviting the team, win or lose, to the White House.

'Megan should never disrespect our Country, the White House, or our Flag, especially since so much has been done for her & the team,' Trump said.

The spat might seem a personal matter, but the World Cup winners captured America's heart in a way that suggests his political antennae might have failed him.

'He has basically painted himself in a corner of being against Megan Rapinoe,' USA TODAY columnist Christine Brennan said on CNN's 'State of the Union.'

'I think we will see more of this because these women are empowered as never before and they are speaking out against a President that they don't respect.'

Rapinoe made no excuses for the willingness of her team to engage in issues beyond wins and losses at a news conference following the World Cup final.

'We say what we feel. All of us really, I know that my voice sometimes is louder, but in meal rooms, in conversations, everybody is in this together,' Rapinoe said, with her medal around her neck. 'We are such a proud and strong and defiant group of women.'

Melania Trump and Barack Obama weigh in on win

Obama quickly tweeted: 'Congrats to the record breakers on the @USWNT, an incredible team that's always pushing themselves—and the rest of us—to be even better. Love this team,' Obama tweeted.

Trump's tweeted lecture on the nature of patriotism was similar to his comments about NFL players who took a knee during the national anthem to protest police-involved killings of black males, a societal issue that the President leveraged into a base play and turned into a huge political controversy.

It prompted Sue Bird, the WNBA star who is also Rapinoe's partner, to defend her in an article in the 'Player's Tribune' that criticized 'the Rude Man on Twitter.'

A White House welcome for championship winning teams has usually been one of the least controversial, unifying moments of a presidential term. However, during previous administrations some athletes refused invitations on political grounds.

But it has become a rising issue since Trump became President, as a growing list of invitees, especially minorities, decline to show up because they disagree with Trump politically.

In January, the then-NBA champion Golden State Warriors went to visit Obama instead of Trump.

The comportment of the USA team in France has not been to the taste of every fan. Their aggressive approach and goal scoring celebrations struck some opponents as disrespectful.

But the political legacy of the USA World Cup winners may eventually go beyond lifting their sport to new credibility and a fight with the President that will eventually be forgotten.

Before the World Cup started, the team lodged a gender discrimination class action lawsuit against the US Soccer Federation. They argued that they did the same job as their male counterparts and got lower wages and worked in worse conditions.

They could not have made a more eloquent case for themselves and they've done more to sell international soccer in the US than the men's national team which has never won the World Cup.

Cries of 'Equal Pay, Equal Pay,' rang around the stadium in Lyon, directed at FIFA officials, before the US team got their hands on the iconic golden World Cup trophy.

'I mean we put on as all players ... every player at this World Cup ... put on the most incredible show that you can ever ask for,' Rapinoe said. 'We can't do anything more.'

Some female politicians have taken up the cause the players, including New York Democratic Rep. Alexandria Ocasio-Cortez ,who tweeted Sunday: 'At this point we shouldn't even be asking for #EqualPay for the #USWMNT - we should demand they be paid at least twice as much.'

Defenders of the status quo say that men's soccer is far more popular and makes more money, suggesting higher salaries for male stars are justified. Trump referred to such arguments on Sunday.