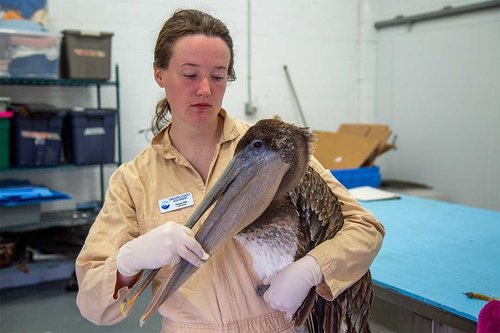 NEWPORT, OR (KPTV) -- A juvenile brown pelican that was found snared by a fishing hook and line is recovering after being cared for by staff at the Oregon Coast Aquarium.

Officials said the bird was found Thursday night at Devil's Punchbowl State Park. It was reportedly severely entangled and in distress.

After staff received the pelican, they began to assess the bird's condition. Staff reported that the bird appeared underweight and had likely been entangled for some time.

Officials said the hook snared the wing in the tendon and through the bone, with the line entangling the bird's entire body. Staff removed the hook, cleaned and treated the wound. They then set the wing in place and provided fluids for hydration.

Due to the nature of the injury, officials said the bird was transferred to the Wildlife Center of the North Coast on Friday morning.

According to officials, the bird's current condition is guarded, but it is eating and gaining weight.

Anyone who finds wildlife believed to be injured or in distress should not approach the animal. Instead, please contact Oregon State Police at 800-452-7888.

How a pair of raccoons (probably) broke into a bank